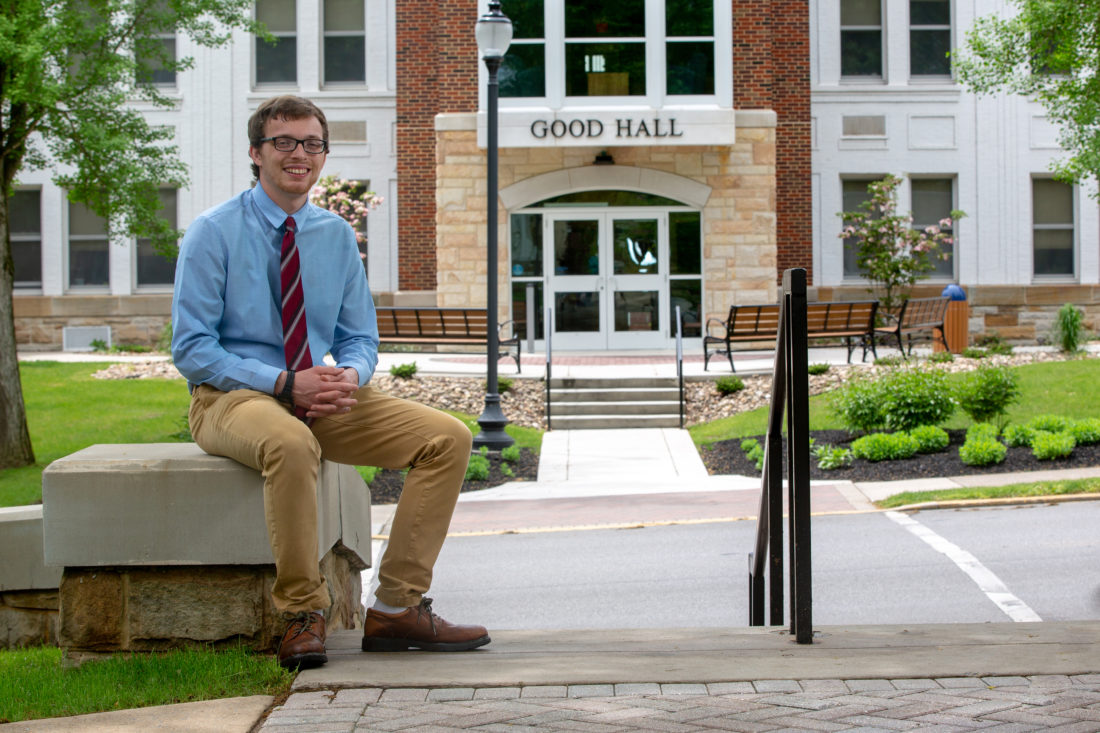 Courtesy photos Dennis Wilt poses for a photo in front of Good Hall on the campus of Juniata College in Huntingdon.

Curiousity, a love of foreign cultures and languages and a willingness to go beyond his comfort zone sent Altoona native Dennis Wilt on an illustrious path that’s taken him to several foreign countries, including his current home Graz, Austria — the second largest city in the European country, thanks to a U.S. Teaching Assistantships program in Austria.

His former high school AP European history teacher Eric Zolnak said he “encouraged Dennis to take advantage of this once in a lifetime opportunity of a Fulbright Scholarship in Austria. Dennis has a wonderful and rare opportunity to build upon his love of language and culture while also serving as a cultural representative for Altoona High, Juniata College, and the United States, Zolnak said. “I am very proud of Dennis and his accomplishments.”

In 2014, Wilt graduated from Altoona Are High School. In May, he graduated from Juniata College. He is the son of Samuel and Anna Mae Wilt of Altoona with many extended family members in Blair County including his grandfather Ronald Wilt and grandmother Mary Ellen Wilt.

Wilt is an English Teaching Assistant employed by the Austrian Ministry for Education, Science and Research administered by the USTA Austria/ Fulbright Austria program. He works as a college-level teaching assistant at the small Church College of Education (KPH) in Graz. This program strives “to bring talented and enthusiastic young people from abroad into the classrooms of secondary schools in communities large and small all over Austria. Ultimately, it is the job of these native speakers as teaching assistants to make learning a foreign language a lively cross-cultural encounter for their students,” according to its website.

“My responsibilities include leading English conversation groups, translating documents between German and English, interpreting some events, helping students with pronunciation and grammar, and working with the school’s international office,” he stated via email.

He is one of about 140 British and American teaching assistants in Austria, and while the majority work in high schools or specialized schools, Wilt is teaching at the college level.

“While I was initially bummed that I was not going to work in a high school, I am quite happy to be where I am because this will give me a better idea if I would prefer to work in a college or in a high school setting. If I would want to work in a college setting, I would need to go for additional schooling. Either way, this just gives me more teaching experience and is a nice professional step in anticipation of a more permanent teaching job,” he stated.

When in high school himself, music played a central role and he played trombone and clarinet with the school’s marching, concert and jazz bands. At Juniata, he participated in music ensembles. And, in Graz, he participates in a choir.

“I participated in the Foreign Language Club,” he said. “This gave me a space among others who really loved learning foreign languages, and it gave me a creative outlet to lead fundraising efforts for international NGOs (non-governmental organizations) and foreign language initiatives as the club’s president my senior year. I am very thankful to David Poole for this opportunity. This further corroborated my desire to become a foreign language teacher.”

“Additionally, Technology Student Association (TSA) had a major impact on my life,” he said. He and his teammates competed in various technology-related events, including travel to regional and national competitions.

“The trip to and from Dallas was the first time I had ever flown in an airplane, and I have loved traveling since,” he said.

Wilt’s curiosity, genuine interest in other languages and “being willing to step out of his comfort zone and immerse himself in other cultures,” Mitchell said is critical to his success.

“Learning a language in school is a great way to build a language foundation and foster an interest and possibly love for another culture,” Mitchell said. “However, spending time in the country, ideally staying with a family and going to school in that country, is the best and most authentic way to immerse yourself and to develop linguistic expertise. Dennis was fortunate to have had many of these opportunities and has grown tremendously on a personal and professional level.”

Eric Zolnak taught Wilt in his AP European History class and remembers Dennis as “a very conscientious and curious student. He would often stay after class to talk about different cultures and discuss outlets for his interest in languages. … Dennis was a hard worker who was always willing to put extra effort into everything he attempted. Along with a strong work ethic, he was a very curious young man. He had many different areas of interest from music to languages, to community service. He also was never afraid to ask questions.”

While at Juniata College, Wilt continued Spanish and German language courses and participated in Language in Motion, an outreach program where American and international college students go to local K-12 schools to speak about their experiences.

“This only cemented my desire to teach foreign languages and strengthened my beliefs about how important this type of education is, especially in this area,” Wilt said. “For younger students, an international college student may be the first foreigner they have ever met. They may never get the chance to meet someone from China, Chile or Nigeria again.”

Wilt also participated in a Cultural Learning Tour, which immerses students in a communities abroad.

First in the Dominican Republic, he taught English songs to children; then Orizaba, Mexico, on an Eagles Abroad Scholarship, where he interned at the Fortin de las Flores School. During the fall of his junior year, Wilt studied abroad in Guanajunto, Mexico, and spent the spring living and learning in Marburg, Germany.

“No single thing strengthened my desire to teach foreign languages more than study abroad. That year in which I studied abroad was by far the best year of my life. I am adventurous and like to explore new things, so I had the chance to find surprisingly beautiful places that I never would have found if I had stayed in the States,” he said. “I loved meeting people from all over the world, too. (I also have many people willing to host me in many cities around the world, so that is a cool perk.)

“Although our life experiences have not always been the same, I was actually quite astonished about how similar these people from all corners of the world and I were in terms of our needs and deepest beliefs. Beyond that, learning a foreign language in school often does not accurately portray that the language is endlessly creative, abundant with life, and quintessential for everyday communication with millions of wonderful people. One really has to travel to a country in which the language is spoken and befriend natives there to understand this.”