For boys and ghouls of all ages

ZombieTown to feature fun for everyone 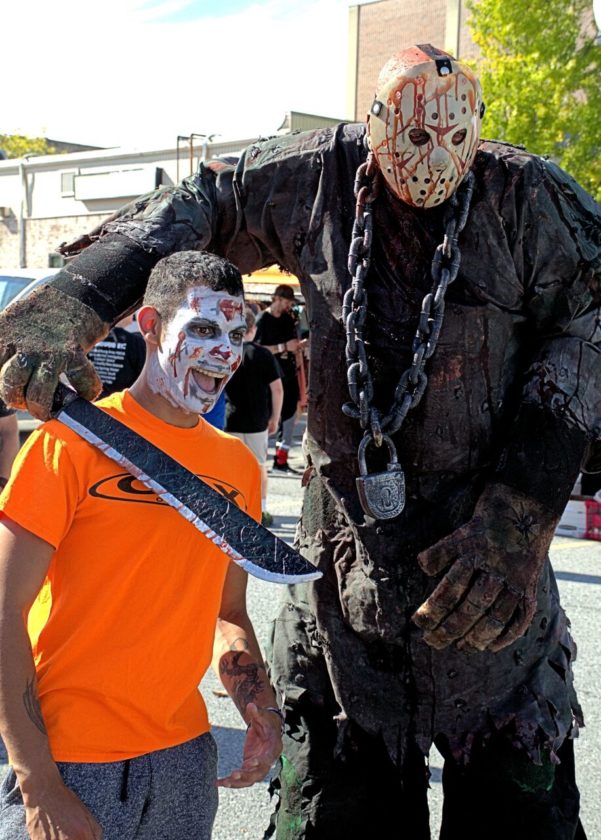 Courtesy photo Fans of the zombie-themed event ZombieTown dress in all manner of costumes for the festivities.

Zombies. Their corpses and half-dead selves have been portrayed in books, films and movies for years. Their pale, bloodied faces and dispirited bodies are void of rational thought. These apathetic creatures will converge on Altoona during the two-day ZombieTown, to entertain all ages and to benefit local charities.

ZombieTown kicks off Oct. 5, with one of the things zombies most love: blood. The Blood Frenzy blood drive to benefit the American Red Cross will take place at the Railroaders Memorial Museum. Anyone who donates blood during the event will receive a ticket for free admission to the Railroaders Museum to use that day.

The Railroaders Memorial Museum will also serve as the site for many other ZombieTown events.

Sherry McCarthy, director of marketing at the museum, is pleased to be able to offer the venue to host several of the ZombieTown events.

This marks the third year that zombies will congregate on downtown Altoona. Lori Rupert, partner and web developer at NOVA6, began the event with her husband, Chris Peters. The duo are video gamers, especially enjoying the zombie genre. They came up with the idea a few years ago noting there isn’t anything else quite like it in the area.

“It’s different. Most events are put together by one organization. We have a lot of people involved in this and some really amazing ideas. It’s evolved,” Rupert said.

The events scheduled for ZombieTown are set to appeal to both children and adults. For instance, there will be a beer garden and bands on Saturday for adults and a kid’s zone for children that will include a “Spooktacular Science” show presented by Penn State Altoona.

Another interesting event is a mobile escape room, by Escape Rooms Altoona, where people will have to get out before the zombies get them. Other highlights include a haunted house by HauntedFrightFest and a zombie survival run.

New this year is a live action, urban zombie survival game. The bus terminal will be closed for “Ruined Expressway,” a team based, infra-red, laser zombie shoot. Returning this time around is Altoona’s own Halloween parade.

“Last year we added the Halloween parade and that was a big hit,” Rupert said.

Zombies will be able to dance the night away with their own zombie prom at the Railroaders Memorial Museum on Friday night. The prom will feature music by Agents of Change, an Alice in Chains tribute band. The Allegheny Ballet Company will perform at the prom. They will also have a “Thriller Flash Mob” on Saturday and the company will open up their school in downtown Altoona on Saturday for a haunted ballet.

There will be celebrity zombies on hand during ZombieTown as well. Eric Shields, owner of Right Move Entertainment, worked to bring Mark Whitey Cooper and Marty Schiff, both from the movie “Dawn of the Dead,” to ZombieTown. There will be a meet and greet with Cooper and Schiff with the opportunity for pictures, autographs and to purchase memorabilia.

“They are both really excited about coming to the event,” Shields said.

Perhaps the most thrilling part of ZombieTown is the number of charities that will benefit by the event. In addition to the American Red Cross Blood Drive, there will be an opportunity to drop off food for Family Services Inc. to benefit its local shelter and teen shelter.

There will be a chance for children to meet local police, firefighters and EMS personnel. A Keystone Pinup event will raise money for local veterans.

“Giving back to the community is probably the main focus of the event. It’s different because most events are for one nonprofit group. A lot goes on under the ZombieTown umbrella,” said Rupert.

Whether for charity or for chilling fun, the two-day event promises to bring boys and ghouls in the community together for a frighteningly good time.