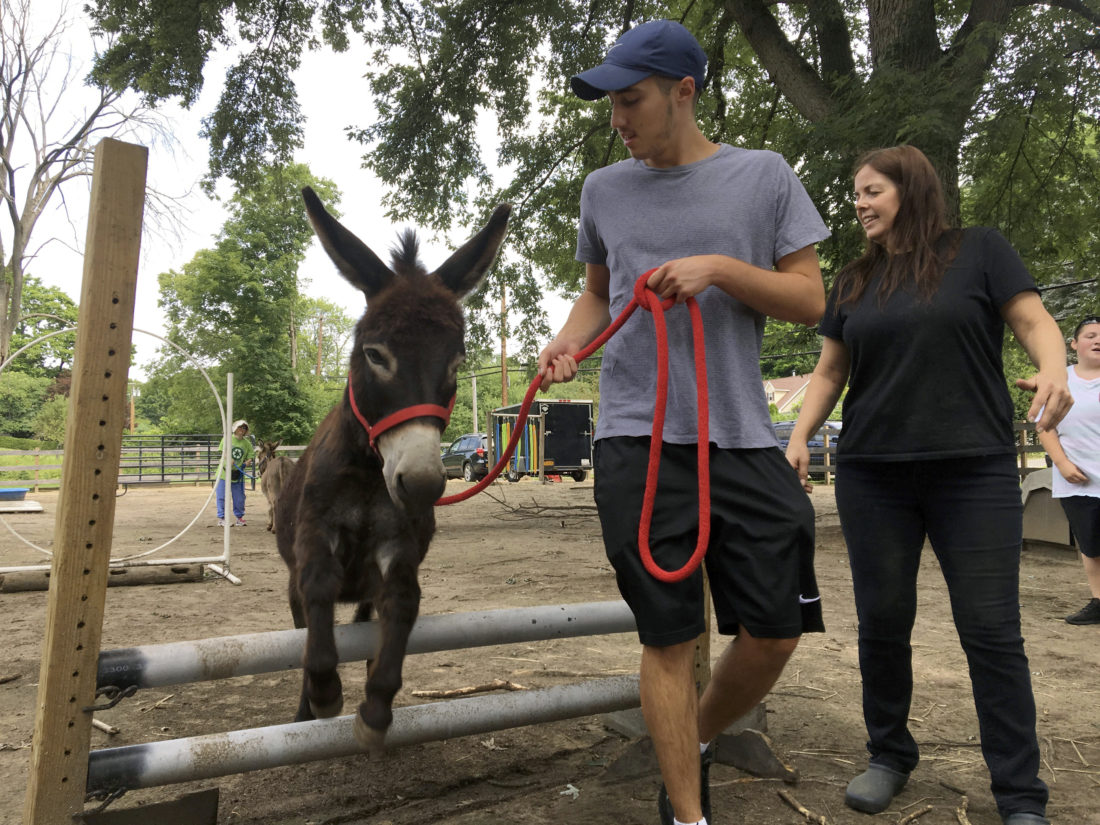 The Associated Press In this July photo Donkey Park visitor Evan Oster leads a miniature donkey through an obstacle course as volunteer Patti Lundgren looks on at Donkey Park in Ulster Park, N.Y.

ULSTER PARK, N.Y. — In most of the world, donkeys are beasts of burden, but the only job of the long-eared denizens of Donkey Park is to nuzzle, bray and beguile the diverse group of people who find comfort in their company.

Donkey Park is the creation of Steve Stiert, who sought a new direction after his job as a software engineer for IBM was eliminated six years ago. He first heard about donkeys from his daughter in veterinary school and fell in love with them. Now he’s devoting his life to providing an opportunity for people to interact with donkeys and experience their calming presence.

“Donkeys resonate with who I am,” says the 59-year-old Stiert, whose equine epiphany came after 26 years glued to a computer screen. “They brought out this caring, sensitive person I had pushed to the background while trying to be successful.”

Stiert has 11 donkeys, a mule and a donkey-zebra hybrid that live in a neat, 1.5-acre mini ranch at his home in Ulster Park, 80 miles north of New York City. He takes them to schools, nursing homes and events for children with disabilities. He also teaches donkey husbandry and has an 800-member Meetup group that features hikes with donkeys.

“They’re great stress sponges,” Stiert says. “A lot of people come up from the city, travel long distances. When they come out here you can just see the stress melting away from them.”

Employing donkeys for animal-assisted therapy is gaining popularity among groups dedicated to protecting them from mistreatment. The Donkey Sanctuary, based in Devon, England, offers donkey-assisted therapy programs for children recovering from cancer, victims of human trafficking and other vulnerable people.

“We’re not providing therapy for the trauma but for developing life skills,” says Caron Whaley, therapy director at the sanctuary.

Every week, The Arc of Ulster-Greene, an organization serving people with intellectual disabilities, takes a group of adult clients to Donkey Park to brush the donkeys, lead them through an obstacle course and feed them hay. The donkeys, nine of them only waist-high, readily approach visitors and linger to have their long ears stroked or their rumps scratched.

Stiert bought his first six donkeys from breeders but then started taking in rescues. While he’s registered as a nonprofit, he relies mostly on his own savings to care for the donkeys. He doesn’t do birthday parties, nativity scenes or other money-making events.

Patti Lundgren says she looked for Meetup groups when she moved to the area and was intrigued by the donkey hikes. Now she regularly drives 45 minutes to volunteer at Donkey Park.

“There’s such a gentle energy about them,” Lundgren says. “I always leave here feeling really good.