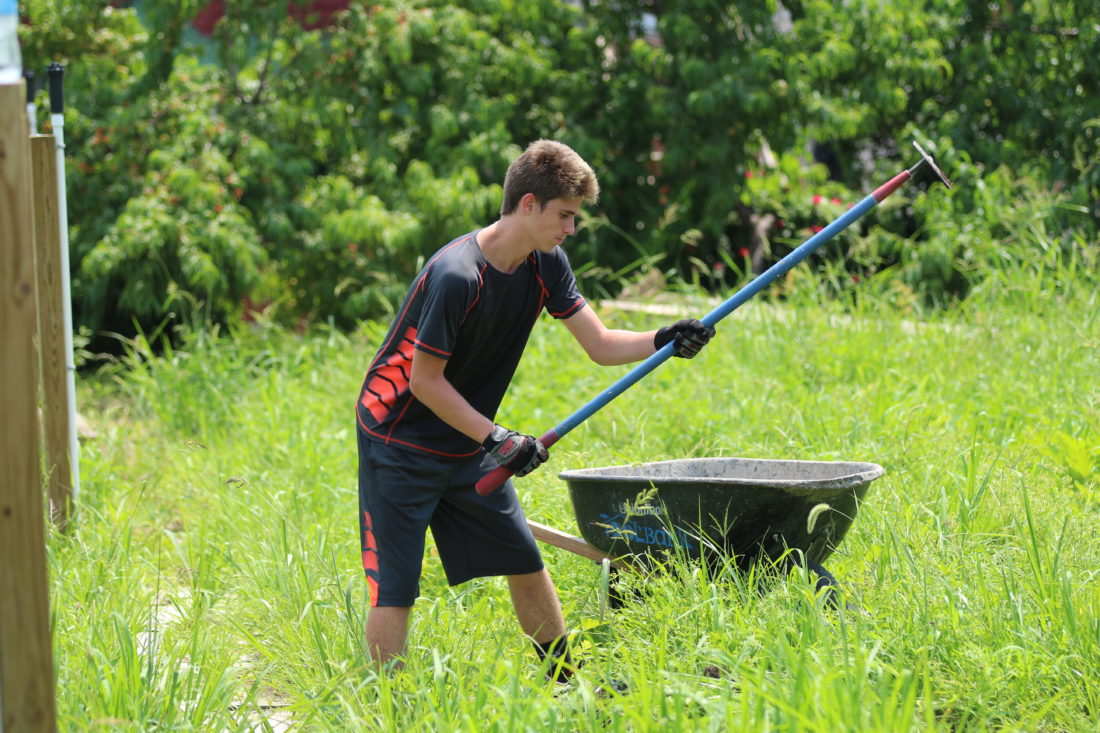 Courtesy photo Local youth spent a week in Baltimore as part of Compassion Commission, a youth mission program in Baltimore. Torrin Hammond, Tyrone, attacked an overgrown yard with a hoe during the trip.

Spending the week of Independence Day doing manual labor in inner city Baltimore with temperatures in the 90s does not sound like a good time.

The teens, associated with Joshua House in Tyrone and Center City Church in Altoona, were part of Compassion Commission, a youth mission program in Baltimore. Hundreds of teenagers from across the nation attended the event, sponsored by Rock City Church for the past 16 years.

It was the 10th time a team from Joshua House went to the event, with each teen raising a few hundred dollars to cover accommodations and meals. In Baltimore, the teens were divided into teams made up of kids from different states. Each team was led by two adult chaperones and assigned various service projects. Some of those included sprucing up the neighborhood, painting walls and murals and harvesting garden vegetables for food pantries.

Teens also got to complete work on a house that Compassion Commission was updating. Each year, the highlight of the week is when a renovated home, obtained through a partnership with Baltimore’s Adopt-A Block coalition, is presented to a family who has never owned one.

Keegan Raabe, 16, of Warriors Mark, said watching Pastor Bart Pierce, director of Compassion Commission House and pastor at Rock City Church, give the house to a veteran was the most memorable part of the trip. Keegen, who was part of Compassion Commission for the third time, got his first opportunity to work on a house and see inside. He helped to remove a tree from the backyard, as well as clean up the area.

“The yard was a mess,” said Aiden White, who was part of the clean-up detail. “There was wood and broken floor tiles, weeds and broken glass. We filled big trash cans and then tossed them into a giant dumpster.”

Aiden, 14, of Williamsburg, said his team also pulled weeds and planted flowers around trees in the area in preparation for the end-of-the-week block party and house presentation.

“It was really cool,” Keegan said of the moment when Pierce gave a veteran and his family the house keys.

Kelton Raabe, 15, and brother of Keegan, said watching the house being given to a veteran made him feel good to be part of the mission.

“People were clapping,” he said. “I was happy for them.”

Completing the final details on the house was special, but Aiden was even given another special assignment.

He acted four nights in a multiple-act play about the Holy Spirit. The play was used to introduce the messages being delivered each night by Pastor Patrick Kiteley of Rain Church in Atlanta.

Aiden said the segments were about sound or how God speaks to people, the wind or the sense of His presence, fire or how God ignites souls and finally, about how God uses all of them in Christians’ lives.

In the services and on the streets, the teens and their leaders said they sensed God using those means in their lives, and they developed a closer relationship with God.

Kelton, who spent time cleaning the streets and praying with residents of the neighborhood, said the evening service when all the teens went to the altar to worship God was moving.

Keegan said he especially liked the night Kiteley called people to the altar.

“That was really cool,” he said. “Hundreds went up to get prayed for, and a bunch of people were praying over them.”

“It really brings me close to God,” he said of the mission trip.

Yet rundown neighborhoods with a history of crime may not seem conducive as a place for God’s presence.

Indeed, Camden Ray, 15, of Bald Eagle, said he felt nervous at times, although he was never afraid despite seeing what looked like “three guys trying to break into a car.”

“I will go back. Most definitely,” said Camden, who made new friends with teens from Delaware, New York, Virginia and Baltimore during his first Compassion Commission trip.

He and others worked together to make a community swimming pool entrance more welcoming, installed insulation at the project house and removed debris and weeds from sidewalks.

Camden said the woman in charge of the pool “wanted kids who came to the entrance to feel safe to go in there.”

While colorful murals were painted along the interior walls, the outside one was blank. So Camden and others painted butterflies, caterpillars, bugs and flowers, previously drawn by an artist, to brighten it up.

Not only the teens, but the chaperones realized they were not in typical neighborhoods.

Among them was Brian Detwiler of Williamsburg. He took teens in his van to four food deserts or gardens that provide the only fresh fruit and vegetables for two miles in any direction.

The food deserts are an oasis in the inner city where apple, peach and plum trees grow as well as crops of corn, carrots, zucchini and tomatoes.

“We pulled weeds and harvested vegetables,” he said.

At the desert garden on the west side, Detwiler asked a man from Baltimore accompanying them: “Are we in a bad area?”

His response was: “This is a terrible area. It doesn’t get much worse.”

Not only was Detwiler in a tough neighborhood, he and another adult had to look out for the 26 kids in their group who came from various backgrounds and social economic situations.

One boy “didn’t listen to me at all,” said Detwiler, who added that he felt he had made no impression on the teen.

But on Friday, that same boy told Detwiler: “I am really going to miss you.”

He said one of the girls on his team sent him a text that read: “Thank you for treating me like one of your daughters. I never had a father-figure in my life. Thanks for telling me I am special. It meant a lot to me.”

Another chaperone, AmyJo White of Williamsburg, was in charge of 12 teens who cleaned and painted the interior of a church.

“It was a different experience. I was out of my comfort zone for sure,” she said.

Yet, even when her group walked the streets, “I felt the presence of God,” she said.

White said as they were going past one house, a woman came out, and they asked her if she wanted prayer.

Before she prayed, White asked the woman what kind of cancer she had. White said the woman looked surprised and told White that she never said she had cancer. Then, she admitted she was battling the disease.

The woman said earlier in the day she had felt alone and asked God for help.

White said the woman told her: “God placed you in my path at just the right time.”

It was White’s first time at Compassion Commission and while she said she was glad she had volunteered, she decided early in the week that it would be a one-time trip.

By the end of the week she had changed her mind.

“On Friday, I was thinking, ‘Oh, yeah. I’m coming back. This experience is priceless.'”

Her son, Aiden, felt the same way. He said in the beginning of the week, there seemed to be some confusion.

“But by the end of the week, you could see the presence of God in everybody,” Aiden said. “Every kid was touched by God in some way. It was a powerful experience.”