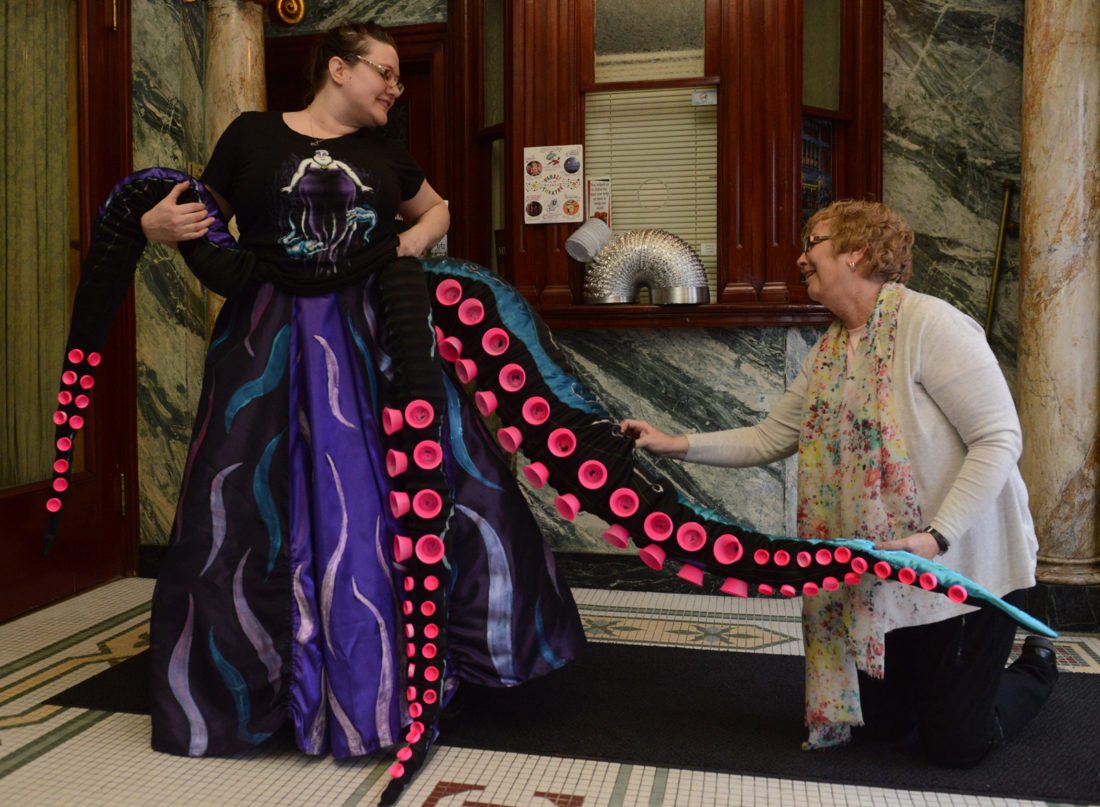 Megan Marcaurelle-Jones will be “swimming” across the Mishler Theatre stage in Altoona Community Theatre’s production of Disney’s “The Little Mermaid” next weekend after landing the titular role she has had her heart set on for years.

“I am beyond excited to be playing this role,” she said. “Ariel has been one of my favorite princesses since I was a little girl, so this is kind of a dream come true for me.”

ACT is creating a challenging setting in which Marcaurelle-Jones will literally be flying across the stage to simulate her swimming.

“It really adds to the magic of the show,” said the Altoona actress.

Tickets to the five shows are selling briskly with scattered seats remaining in the lower orchestra section. It opens at 7:30 p.m. on May 3, with nightly shows, as well as 2 p.m. matinees, on May 4 and 5.

It is a wide collaboration with ACT bringing in a number of area artists, including sets by John Rita and Joe Servello, puppets by Michael Allison and Joe Houser and costumes by a committee of local designers, said ACT executive director Steven Helsel, who also is directing the production.

Rita, while known lately for his architectural design work on the historic Blair County Courthouse, has been creating theatrical sets for years. Designing the backdrops for “The Little Mermaid” has been a team effort including rookies, as well as the veteran Servello, who created the mural on the Mishler Theatre building, Rita noted.

“It has created a lot of interesting problems to solve,” Rita said. “It’s been exciting.”

Some backdrops are 25 feet tall and 30 feet wide. They were painted on the floor of the scene shop at the ACT offices around the corner, cut in sections and hauled with cables and cranes into the theater, Rita said.

A large ship that will appear to be floating on water is actually a scaffold covered with “this illusion of the side of a ship” with a 20-foot sail, he said.

“I think it’s going to be a neat illusion,” he added. “It’s a big operation” that will heavily depend on set lighting, which was still being put together earlier this week.

Helsel said the “highly technical show” incorporates “flying” for many underwater sequences, “the likes of which have never been featured before on the Mishler stage.”

But it’s not the first time for Marcaurelle-Jones.

She hasn’t played the role of Ariel before, but she’s been a Disney princess, playing Belle in Cresson Lake Playhouse’s “Beauty and the Beast” last summer. She previously flew twice on the Mishler stage, as Wendy in ACT’s “Peter Pan” a decade ago when she was 16 and as Mary Poppins in P&J Productions’ “Mary Poppins” in 2015.

“One of the biggest challenges of this show for me is adapting to singing while flying,” she said. “That’s something Iáve never had to do before so it was an adjustment.”

Playing her human interest, Prince Eric, is Ian Brumbaugh, a rookie to ACT, but a veteran in local theater, having been in many productions with Cresson Lake and P&J, as well as his high school career at Penn Cambria High School. He currently is a second-year English education student with theater credits at Penn State Altoona.

Sherri Elle, who debuted with ACT as a third-grader in 1992 as Young Louise in “Gypsy,” will “spread her giant tentacles across the stage as Ursula,” said Helsel. Mark Perehinec, last seen as Eliza Doolittle’s father in ACT’s “My Fair Lady,” plays Ariel’s dad, Triton.

Malvoisin impressed the ACT audience with his booming baritone voice in last year’s “Big River: the Adventures of Huckleberry Finn” as Jim the runaway slave. Rupp has performed on the Mishler stage in several ACT and P&J shows and recently was in “Pride and Prejudice” at Hollidaysburg Area High School. Kelly is a veteran of several State College area productions who played Pinocchio in ACT’s “Shrek” a few years ago, said Helsel.

Helsel said more than 70 people auditioned for roles in the popular production that will entertain all ages “with a lot of humor that adults in the audiences will appreciate, plus some absolutely glorious singing.

“And the story carries a nice message about accepting others who might be different or from a different ‘world’ than you.”

Where: The Mishler Theatre