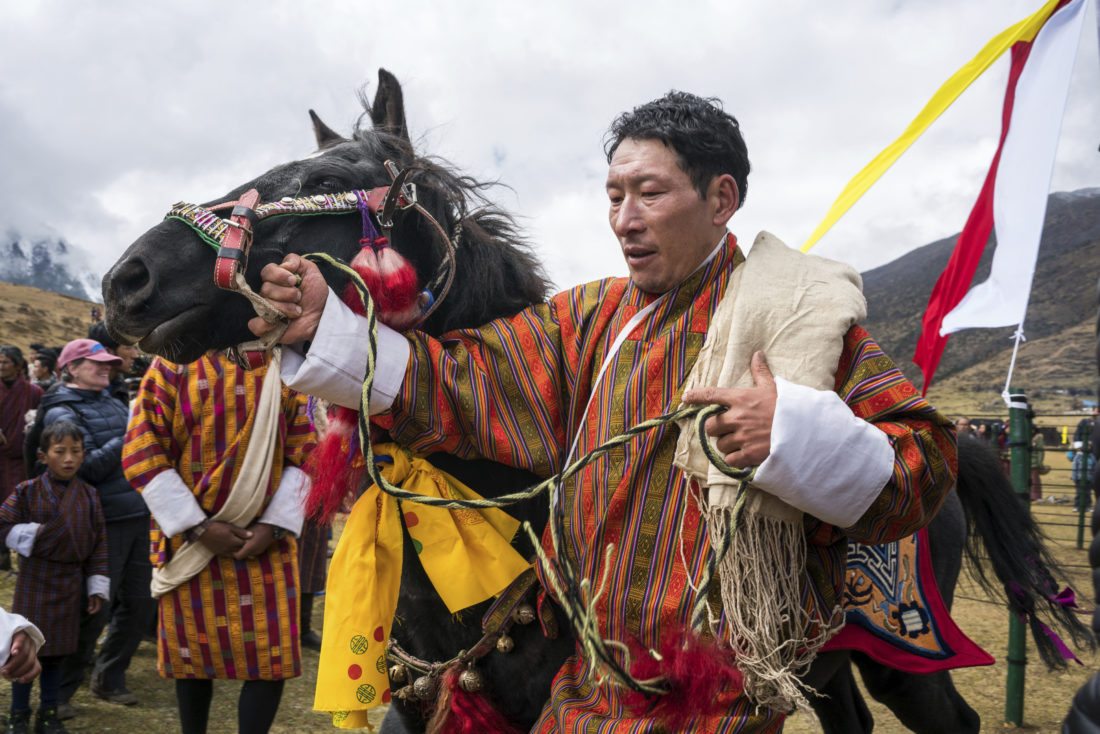 This Oct. 23, 2017 photo shows a Layan highlander, in native dress, parading his pony, which won the horse race at the Laya Royal Highlander Festival, in Bhutan. The little ponies were festooned in ribbons, feathers and other colorful touches. (Alexandra Reynolds via AP)

Never conquered, never colonized, tiny Bhutan retains much of its deep and ancient culture. But it’s attempting to chart a unique path in today’s world: Modernize and democratize without sacrificing independence, culture or its pristine mountains and forests.

It’s also taken a unique approach to tourism, promoting itself as an “exclusive” destination through “high value, low impact” tourism. Tourists can only visit by booking through licensed tour operators with packages that cost $200 to $250 a day, depending on the season. Some of that money is earmarked by the government for health care, free schools and infrastructure. Despite the high price tag, Bhutan was listed by both The New York Times and Afar magazine on “where to go in 2018” lists.

Wedged between India and China, Bhutan is the last remaining Buddhist kingdom in the Himalayas. But the country has transitioned from absolute monarchy to a democratic, constitutional monarchy. Parliamentary elections were first held in 2008 despite resistance from Bhutanese who revered their royals.

The country’s fourth king, and father of today’s ruler, introduced the concept of gross national happiness in the 1970s as more important than gross domestic product. The GNH measure, far from a bumper sticker slogan, embraces sustainable development, education and health, valuing societal good over economic growth. Cigarettes are banned, and Bhutan is the world’s only carbon-negative country, producing less carbon than its forests absorb.

Tourists heading to the highland festival face a 36-mile roundtrip trek from 6,000 feet to more than 12,500 feet in altitude mostly on rocky, precipitous trails also used by donkeys (laden with propane tanks, tents and other supplies). Rain can turn those trails into a slippery mess of mud and poop.

The challenging route didn’t stop the king from trekking up in a few hours last October. Nor did it stop a woman in native dress — handwoven duri (skirt), top and shamu la, a golden crownlike hat — from marching up in red pumps. Most tourists, though, take two days with constant pauses to catch their breath. The payoff: breathtaking views of the Himalayas above and roaring glacier-fed rivers below.

One festival highlight is the nyagay, or strongman race (strong woman, too). Six women in yak-wool skirts dragged massive planks of wood halfway across a field, then dropped the planks and heaved 50-pound grain sacks onto the backs of their male partners. The women then climbed on the men’s backs, and the men retrieved the wood, then raced back to the starting line. All this in four minutes at an altitude of nearly 13,000 feet.

Yak-wool tents, impervious to the damp, ringed the festival field and provided protected seating. Booths offered instruction on sustainable products and practices, from animal husbandry (“use only inferior mares for mule production”) to the benefits of Bhutanese honey (bees here are healthy because there are few insecticides).

Ubiquitous Bhutanese dogs, unflappable and friendly, curled up on the field like commas and snoozed. The Merak nomads wore their signature black beanies, which have dreadlock-like braids that divert raindrops away from the face. Vendors sold yak bells, yak wool hats and purses, yak cheese wrapped in leather (smelling like a good parmigiano) and vials of the pricey fungus, cordyceps, said to be powerfully healing.

A tent decorated with gold swag and a thronelike chair was designated for the king. But he spent most of his time greeting guests warmly and without pomp.

Before a race where stubby ponies galloped up and down hills, feathered headdresses flying, lunch was served.

Hundreds of villagers and visitors alike sat cross-legged as helpers (including– royals) ladled rice, vegetable curries and hot butter tea, all compliments of the king.

The happiness quotient was as high as the sky.