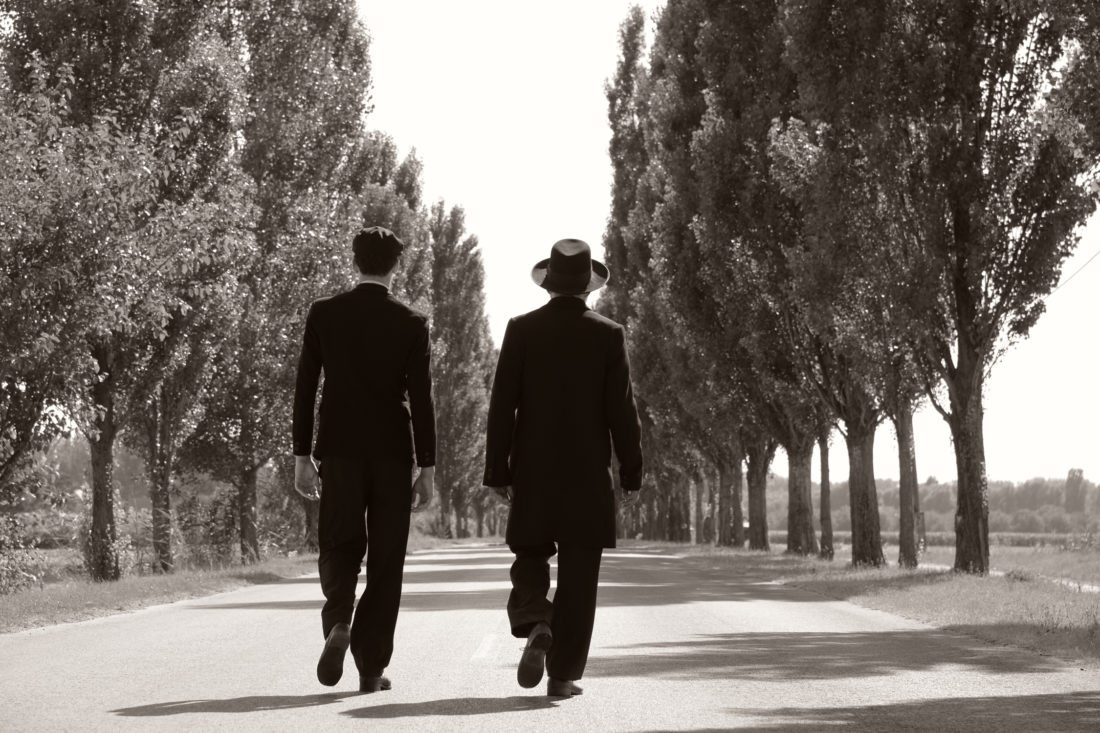 Courtesy photos In this scene from “1945,” Hermann S’muel (Iv’n Angelus) and his son (Marcell Nagy) walk through the Hungarian countryside toward the village. The movie “1945” will be shown at 7 p.m. Feb. 22 at the Penn State Devorris Downtown Center, Altoona, as part of the Jewish Film Festival.

The war is over and the Hungarian villagers start whispering as soon as the two Orthodox Jews arrive at the train station. Are they there for their property illegally seized before the war?

If you can see only one of the four movies in this year’s Altoona International Jewish Film Festival, see “1945,” said Bill Wallen, executive director of the Greater Altoona Jewish Federation, which is sponsoring the event for the 19th year.

“They’re all really good films, and people like different things, but (‘1945’) is my favorite,” he said.

“The Zookeeper’s Wife” opens the festival on Feb. 15, followed by “1945” on Feb. 22, “The Women’s Balcony” on March 1 and “An Act of Defiance” on March 8. The festival includes dinner in the Heritage Discovery Center at 5:15 p.m. followed by the films in the Penn State Devorris Downtown Center next door at 7 p.m.

The cost for both is $25, and dinner reservations are required by calling 515-1182 or emailing altoonafed@gmail.com. No reservation is required for those simply wanting to see the movies and the cost is $5, except it is free for students of all ages and members of the clergy, Wallen said.

The Devorris Center houses the former Playhouse Theatre and has the large theater-size screen and surround sound.

“You get the good sound quality and it’s just like being in a regular theater,” Wallen said. Even if any of the movies are available through streaming services or on DVD to watch on television, “that’s a small screen. You need to see these on the big screen.”

Wallen didn’t know the menu yet, but said it is buffet, sit-down style and is catered by Paula Binus.

“We get a really large turnout for the dinners,” Wallen said. “This is the time where people get to visit and talk and get to know each other, and it’s a really nice evening together. It’s not rushed. It’s comfortable, and you always meet new people.”

Most attendees come from outside the Jewish community, he added, “so it is a real community event, and it’s a really good opportunity to learn about Jewish culture, Jewish history, Jewish events.”

A committee reviews the films based on suggestions welcomed from those inside and outside the Jewish Federation, Wallen said. Those selected are a “balance of entertainment and education,” but he noted that the festival has no documentaries this year, as it has previously. However, two of the stories are based on true stories and another is based on actual events that occurred.

The story tells the true account of keepers of the Warsaw Zoo, Antonina and Jan Zabinski, who hid persecuted Polish Jews in plain sight until safe houses were found.

“Regardless of the consequences, they refused to wither before the Nazi menace, took matters into their own hands and sheltered 300 Jews under the Germans’ noses,” according to the description released by the movie producers.

Wallen said children can view the movie, which aired briefly in Altoona theaters when it was released last year, as it doesn’t show “people being brutalized.”

It was partially shot in Poland, but it’s a Hollywood production, Wallen noted.

The other three films are international, were produced abroad and are not rated.

The movie opens on a sweltering day as Hungarian villagers prepare for the wedding of the town clerk’s son. The clerk fears that two Orthodox Jews who arrive at the train station are heirs of the village’s deported Jews and have come to demand their family property back. Other villagers fear that more survivors will come to reclaim their property, as well.

“Everybody wants to know what they want, what’s going to happen now,” Wallen said. “It brings up memories and guilt about what happened before.

Wallen said more “very good movies that are tied in with the Holocaust” are being produced in Hungary nowadays. The same producer made “Son of Saul,” which won an Academy Award for best foreign film in 2016.

Even though it’s in Hungarian, it has subtitles in English and “you know what’s going on,” Wallen said.

He noted that it is filmed in black and white, which is “very effective.”

“Each shot in the film is almost like a single photograph,” he added.

The women in an Orthodox Jewish community in Jerusalem are appalled when their synagogue gets a strict new rabbi who preaches rigid gender roles, according to the movie plot. They decide to fight back against his ultra traditionalist beliefs, while raising money to repair the “women’s balcony” in the synagogue.

“You don’t often see in Holocaust movies that women are heroines. It’s often about men,” Wallen said. “In ‘The Women’s Balcony,’ … the women eventually assert themselves.”

It was shot in Israel and includes scenes of Old Jerusalem, Wallen said.

“It is a good story, a PG-type story,” he said. “The cinematography, the sound effects, the black and white of it. I think it’s a really well-made film.”

And while it is in Hebrew with English subtitles, “you pretty much can figure out what’s going on,” he said.

In this story, a Jewish attorney, Bram Fischer, risks his career to stand up for social justice, specifically 10 political activists including Nelson Mandela and his inner circle of black and Jewish supporters. This true story tells how they face a possible death sentence for conspiracy to commit sabotage after they are arrested by the apartheid South African government in 1963.

“This is the first time we’ve shown a film related to the fight for freedom and equality in South Africa,” Wallen said. “It shows how Jews were in the forefront fighting along with the Afrikaners for their freedom. Most people don’t know, but two of the defendants in the trial were Jews and the attorney who represented (Mandela) was Jewish.”

The movie captures some of the beautiful scenery of South Africa, he said. And, it makes the viewer think the ending will be happy because — as most people know from history — the defendants did not get the death penalty.

But without spoiling it, he said, “it’s a sad ending and what happened is real.”

When: Various dates, appetizers and dinner at 5:15 and films at 7 p.m.

Admission: $5 for films only (free for all students, clergy); $25 for dinner and movie