Fantastic fruit: Take a drive to local orchards, and see that tasting and seeing is believing 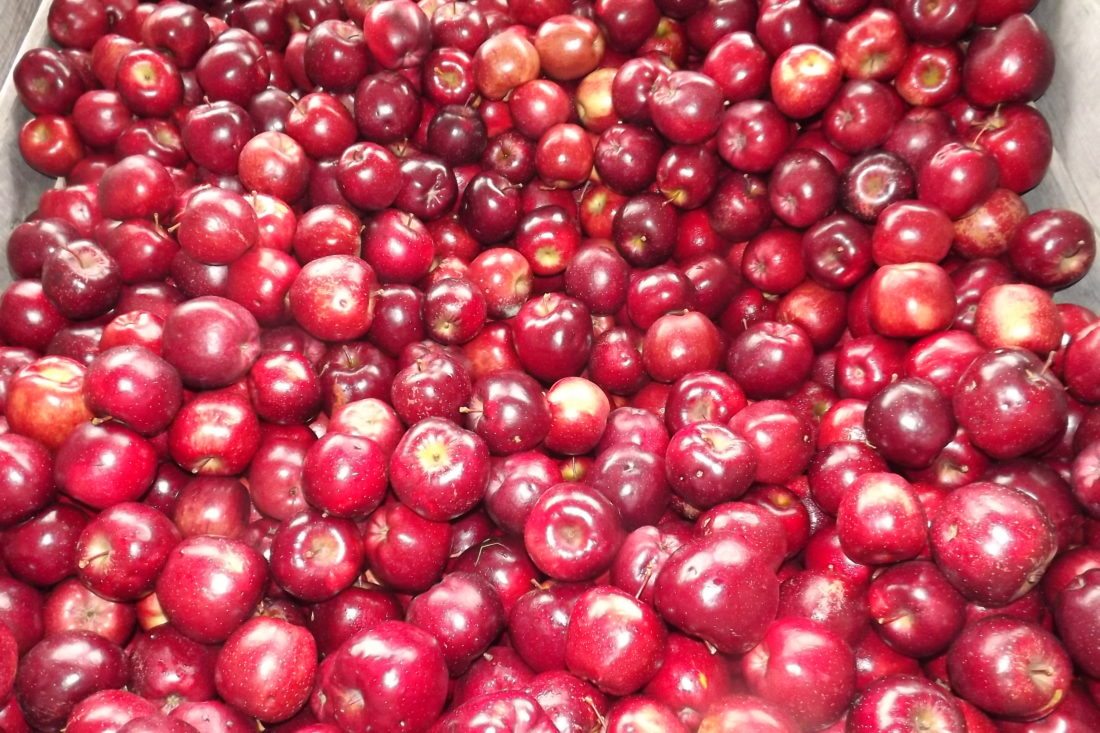 Mirror photo by Cherie Hicks / Bins of apples sit in the market on the front porch at Ridgetop Orchards in Fishertown.

Editor’s note: This is the next in a regular series on travel by Mirror Life writer Cherie Hicks.

Marlene and Dan Matthews made the 80-mile drive from their Level Green home near Murrysville to Fishertown twice in three days earlier this month.

Picking out a peck of apples at the Ridgetop Orchards’ front porch, Matthews said it’s an experience that he and his wife enjoy, sampling from among the dozen varieties, as well as apple cider.

“It’s worth the trip, and it’s an enjoyable ride,” he said. “We get to enjoy the fall foliage.”

The Matthews couple is not alone in getting out on the road this harvest season in Central Pennsylvania to taste the region’s bounty and peep at leaves.

“Our clientele comes from all over … Pittsburgh, West Virginia, Virginia, Maryland,” said Lois Boyer, who owns Ridgetop Orchards with her husband, Dan. “Our soil on Chestnut Ridge is known for growing the best-tasting apples. People now want an experience when they come to a fruit market, and we have a tasting bar.”

Added Dan Matthews: “I like the variety here. You can sample what you like and know what you’re buying before you buy it.”

The market, which moves inside the packing house in inclement weather and is open through March, is on the front porch, with bins holding different varieties of apples. Color-coded clothespins let shoppers know which ones are good for snacking, baking or cooking, and you can mix and match.

“We just eat them,” Matthews said, adding he likes the Empire and Jonagold varieties. “A snack at night with a piece of cheese, maybe a piece of bologna.”

A tasting bar also includes cider that the orchard imports from the eastern part of the state, but Ridgetop has its own line of jams, jellies, apple butter and honey, which comes from bees rented in the spring to pollinate their fruit trees, Boyer said.

The produce stand of Bridenbaugh Orchards on Cove Mountain Road just outside of Martinsburg isn’t large enough to accommodate a tasting bar, but shoppers certainly can sample before buying, said Gail Bridenbaugh, owner.

“If you want to know what a smokehouse apple tastes like, we let you taste it,” she said. “I like the old-fashioned variety … hard and tart. But you might like yours soft and mellow.”

Bridenbaugh now has 10 varieties in stock and will have two more coming in soon before the season closes at the end of the month, she said.

Fall samples of apple cider and more are available for children who take the Everett Railroad’s Pumpkin Patch Train, which runs today and next weekend. Adults can relax and enjoy the fall colors on the steam-powered ride between the Hollidaysburg depot and a Monastery Road stop.

JB Tree Farm on Route 22 just across the Huntingdon County line near Alexandria has a Fall Frenzy every day through the end of the month, and offers hayrides, a corn maze and other games, as well as tasty treats that can be roasted at a campfire, and strawberries and raspberries that were lingering last week due to the unseasonably warm fall. Other homemade products include jams, fruit syrups and sauerkraut.

To the west near Loretto, the Vale Wood Farms Pumpkin Patch is open through Oct. 22 and similarly includes games, hayrides and treats, such as Pumpkin Pie and Apple Pie ice creams and hot apple dumplings.

Head north up to Port Matilda and Way Fruit Farm, where you can check out apples and cider at the farm and cold and hot mulled cider and other treats at The Way Cafe, said co-owner Megan Way Coopey.

“We bake fresh, apple cider donuts in our bakery and they go perfectly with our cider,” she said, adding that the cider is unpasteurized and has no preservatives.

You can mix shopping with some family fun at the Way Farm’s festivals that include free wagon rides to the pumpkin patch every Saturday in October.

Further north in Bellefonte are the annual fall excursions for leaf peeping on the Bellefonte Historical Railroad at 320 W. High St. Excursions, including a couple of Halloween tours, still were available for Oct. 27 and 28.

No treats were listed on the Bellefonte train website, but just down Potter Street from the depot you can sample cider. The hard kind.

Good Intent Cider opened in 2011 and is similar to a wine bar or brewery where you can try “flights” or samples of the goods at one of several bars and a scenic patio, weather permitting, said owner Adam Redding. The product is made like a white wine but uses apples instead of grapes that are fermented into alcohol, he said, adding that flights go for $6 and 6-ounce pours are only $4.

“The idea is you want to use apple varieties that are complex in flavor so that you don’t end up with something that simply takes like apples,” he said. “Ours are more like a sparkling wine. They’re lighter.”

He said one is finished with crabapples, another is sweetened with maple syrup instead of sugar, and one is flavored with hops, an ingredient usually associated with beer-making.

The Adam’s Apple is the flagship, semi-dry cider made with freshly pressed juice, no added water. With 8 percent alcohol, it should be served chilled. The most popular is called North Meets South, which is aged in bourbon barrels and is about 10 percent alcohol.

During Prohibition, non-alcoholic cider came into being. Today, you have a choice — Good Intent alone has 12 varieties on tap and another half-dozen in bottles — and you can enjoy the fall foliage while driving there.