‘It’s time’: One-man play at the Mishler looks back at Vietnam 50 years later 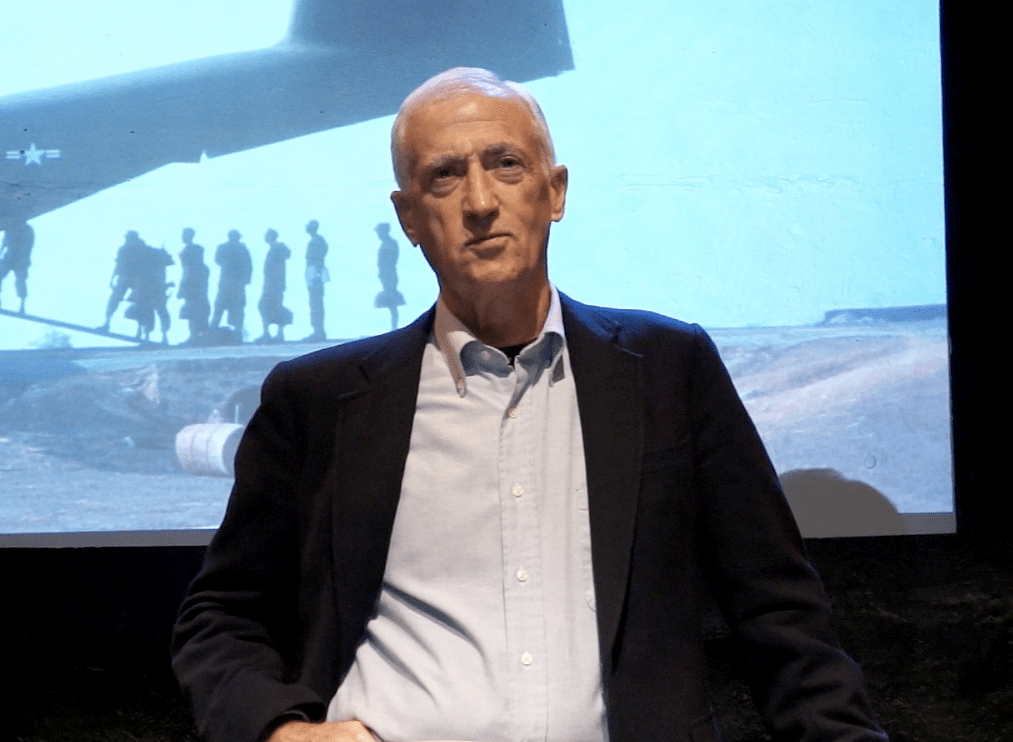 Courtesy photo / Stu Richel perform a scene from his one-man show, “Vietnam ... Through My Lens.” Richel will bring his show to the Mishler Theatre in Altoona on Sunday.

For a war that wasn’t even officially declared, Vietnam polarized a country that still hasn’t quite come to grips with the conflict a half-century later.

“It’s been 50 years, and it’s time to take a new look,” said New York-based writer and actor Stu Richel, who has done just that with his one-man play on his experience as a combat photographer in Southeast Asia.

Richel will perform his “Vietnam … Through My Lens” at the Mishler Theatre in Altoona on Sunday.

The show is presented by and is a fundraiser for Fire Base Eagle, a local nonprofit group of Vietnam veterans that seeks to educate the community on the war, said founding president George Montgomery. Members of his group usually speak at schools and other events, so it was “rare” to stumble on a fellow veteran who put the story into a play, he said.

“Stu not only can write something like this, he put it into a show,” Montgomery said.

Montgomery hasn’t seen the full play, but he said it is entertaining, educational and inspiring.

“What we like about it is there is no blood and guts, no politics,” he said.

Fire Base Eagle was founded more than 20 years ago after helping bring The Wall That Heals, a half-size replica of the Vietnam Veterans Memorial, to Altoona permanently. It had hoped to raise millions for a museum dedicated to the war, but the project didn’t go as planned, and the group today barely covers its operating costs, Montgomery said.

He stumbled on a story about Richel’s show after an off-off Broadway run in 2014, and this year reached out to see if he could bring the show to Altoona and raise funds as the nation commemorates the 50th anniversary of the war.

“I know this won’t raise a lot of money. It’ll raise more awareness,” said Montgomery, who graduated from Altoona Area High School School in 1966 and was drafted into the Army Infantry and served in Vietnam during 1968-69.

Montgomery said he rarely opens up about his experience, “but we were disrespected. We did what we were asked to do … A lot of (Vietnam veterans) don’t want to talk about it. That’s fine, but maybe this show will help families understand a little better why their parent or brother or sister or friend came back different. … It’s time.”

Richel said that after he returned from his one-year tour in 1970, he became so focused on his career, he wasn’t subjected to that disrespect.

“But many friends of mine talk about having been spit on, how they were unwilling to wear their uniform because of the abuse they were taking,” he said. “It was very sad.”

Richel had completed law school prior to serving as an Army photographer. When his tour ended, he went home to New York, passed the bar exam and began his legal career that eventually took him to California.

All the while, he dabbled in acting and writing, and he quit his law career to devote to the arts full time, eventually returning to Manhattan. He worked in film, television and theater, and he wrote several one-man plays.

“Vietnam … Through My Lens” is his fifth solo-show effort, and he collaborated with fellow New York actor and writer Linda Nelson to take it to the stage.

“Linda has been my dramaturge, moving me from a series of stories to a woven stream of stories, memories and reflections punctuated by photographs” projected on the stage, Richel said. “All of the shots of Vietnam, all the combat photographs are mine.”

Richel said his show is bolstered by critical attention being given to the upcoming release of Ken Burns’ latest documentary, “The Vietnam War,” to premiere on PBS on Sept. 17.

“That is going to bring new heat and light to the story of Vietnam,” Richel said. “Anything (Burns) does gets attention.”

“As the nation decides how we wish to observe this anniversary, I think we should be open-minded,” he said. “I would encourage people to listen to each other. That may be a novel thought these days.”

Richel, however, does not recommend his play for children younger than about 15.

“The show is tasteful,” he said, but he uses an expletive or two and makes several sexual references. It runs about 75 minutes with no intermission.

What: Stu Richel’s “Vietnam … Through My Lens”