‘The Ark’ docks in Tyrone 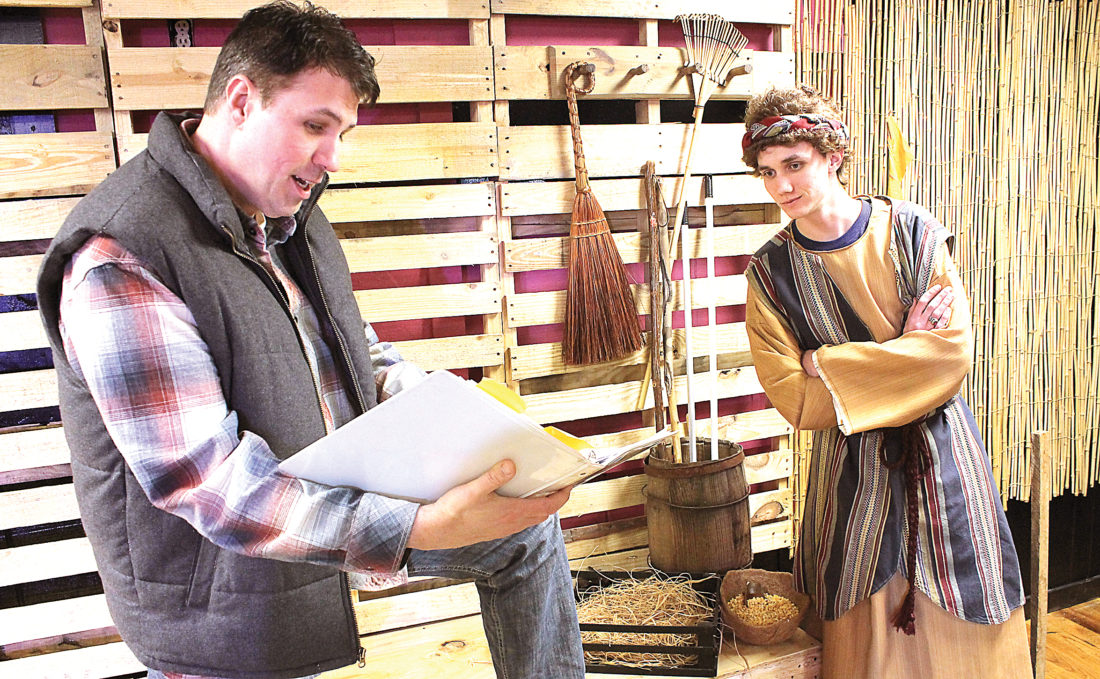 Courtesy photos Director Matthew C. Scott gives staging notes to Shem, played by Auston Patterson, during rehearsals for “The Ark.” The Iron Bridge Dinner Theatre in Tyrone will present the “dramedy” of Noah and his family now through April 30.

The Iron Bridge Dinner Theatre in Tyrone will present a story of redemption during the Lenten and Easter season that took place thousands of years before Christ’s death and Resurrection.

It is still a story of faith — the faith of one man who built a huge boat to save his family and all of God’s creatures from a flood that would encompass the earth.

Described by production stage manager and actor Jeremy Littlejohn as a “dramedy,” the musical “The Ark” will open at 6:30 p.m. today at the Iron Bridge Dinner Theatre, 427 McFarland Road, Tyrone.

“Much of the show is very lighthearted and funny, but there are definitely some dramatic undertones, and certainly some reverent ballads,” said Littlejohn of South Bend, Ind.

It falls in the sub-genre of folksy and charming Bible-derived musicals, such as “Joseph and the Amazing Technicolor Dreamcoat” and “Godspell,” said Drew M. Baker, executive producer/director for the professional theater company. “‘The Ark’ is a charming, family friendly musical.”

And although it is not a Passion play, Baker noted the two-hour production retells the account of the flood, an early biblical story of salvation with God honoring his promise to spare Noah and his family from destruction.

The storyline focuses on Noah, played by David Hess of Tyrone, and his family, who experience some waves in their relationships as they float on uncharted waters.

Ham, the middle son, played by Littlejohn, butts heads a lot with Noah, Baker said. Ham’s wife, Egyptus, played by Karen Querns-Dupper of Bellefonte, encourages him to reconcile with his father.

Comic relief is provided by the not so talkative relationship of hard-working Japheth, the oldest son, and his wife, Sariah, a shallow beauty queen. Their roles are performed by Matthew C. Scott of Orbisonia, who is also the director, and Carrie Saloutos of Las Vegas.

Youngest son, Shem, played by Auston Patterson of Orbisonia, is a mama’s boy. He is married to Martha, played by Lydia Boonie of Alexandria. They are naive newlyweds who quarrel through most of the show, Baker said.

And finally, there is Noah’s wife, Eliza, played by Karen Mogle of Tyrone.

“She is full of life,” Baker said, “but a bit salty about the ‘entire’ ark process.”

The tumultuous relationship he has with Ham began during his son’s upbringing, Littlejohn said, pointing out that the boys were raised by their mother while their father built a gigantic boat despite being mocked as a fool by everyone around him.

He said Ham has built up a lot of resentment toward Noah.

“He watched his father trust in his own faith by blindly following whatever he believed God wanted him to do,” Littlejohn said. “Ham is someone who believes in what he can see and touch. The root of all of it is Ham craving for his father’s love and affection. Because his belief system doesn’t match his father’s, he doesn’t believe that Noah can ever truly love him completely.”

Ham never intended to join the others on the ark and only came aboard so his new bride could met his family, he said.

“Then the rain comes and traps them inside, thus forcing him to deal with these conflicts head-on in an incredibly confined space,” Littlejohn said.

While the ark set takes up much of the Iron Bridge Theatre stage, no animals appear in the scenes. But the theater-goers know they are present, because they are the animals.

Noah introduces the concept during the opening number, “Welcome Aboard,” where he is rejoicing that all of the creatures have shown up by addressing the audience as the animals, Littlejohn said.

However, the audience is required to do nothing but take in the show.

“The characters make a reference occasionally to the audience as the animals, but they are not interactive,” Baker said.

Littlejohn said the best example of the technique is when Eliza is cleaning up the animals’ waste and makes reference to certain animals, such as the horse and elephant.

The chore of having to clean up after hundreds of animals is one of several difficulties that the human passengers must endure.

“Cabin fever is a concept that all of the characters deal with throughout the show,” Littlejohn said, “and culminates in the end of the first act when everyone begins to despair, lose hope and question the purpose of it all. Then Act Two happens, and as anyone who has read Genesis can tell you, the rain stops and the water recedes.”

Throughout the production, the music expresses the moods and thoughts of the family members with such songs as “Whenever He Needs a Miracle,” a trio by the brothers called “Oh Yeah” and the opening and recurring theme “You Must Believe in Miracles,” according to Baker.

With the book and lyrics written by Michael McLean and Kevin Kelly and music by McLean, the show was originally performed off-Broadway about 10 years ago. The New York Times called it “tender and funny,” according to Miracle or 2 Theatrical Licensing’s website.

While it did not have a long run in New York, Littlejohn, an actor and director for more than 20 years at theaters nationwide, including seven years as artistic director of the Round Barn Theatre in Nappanee, Ind., said it has enjoyed success in the smaller setting that many regional theaters across the country have to offer.

“While this story has been told thousands of times over, you will love hearing it through fresh songs and a story that every family can identify with,” Baker said.