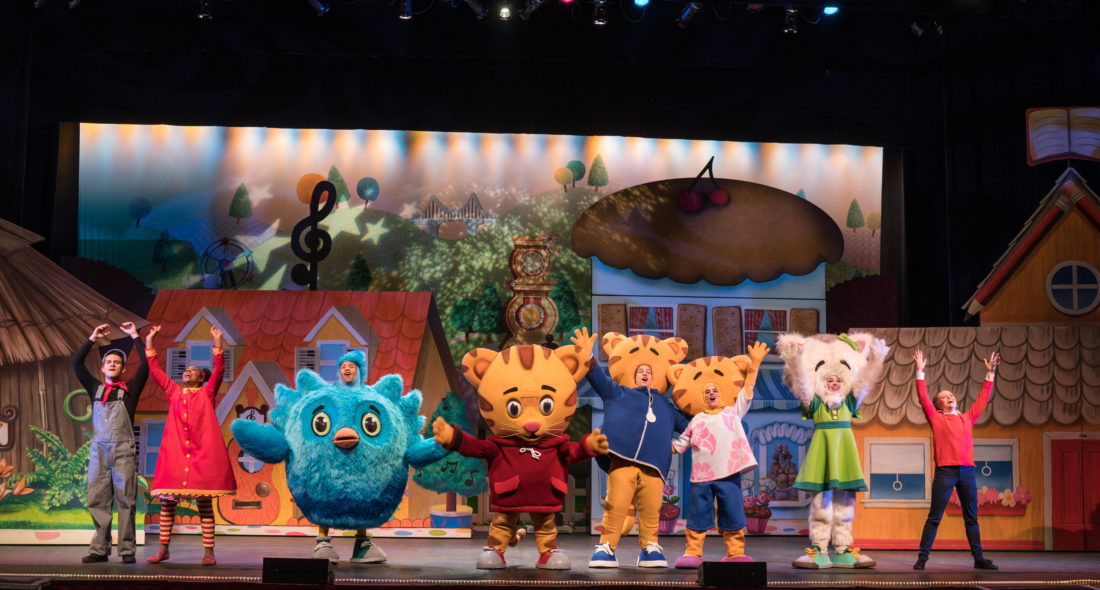 UNIVERSITY PARK — Even after “Mister Roger’s Neighborhood” ended its run on PBS in 2001, the legacy of teaching emotional intelligence and human respect to preschoolers continued in the animated “Daniel Tiger’s Neighborhood.”

That neighborhood is coming to a nearby stage when the Center for the Performing Arts at Penn State University presents “Daniel Tiger’s Neighborhood Live!” at the Eisenhower Auditorium on Sunday at 2 p.m.

“It’s got great appeal for ages all around,” said Katelyn Bowman, who plays two characters in the nationally touring show, Miss Elaina and Teacher Harriet. “If you’re a fan of Mr. Rogers, you’ll definitely be in for a real treat.”

The live-action production is based on PBS Kids’ award-winning animated series “Daniel Tiger’s Neighborhood.” The series follows the adventures of the offspring of Daniel Striped Tiger, a resident of the Neighborhood of Make Believe from “Mister Rogers’ Neighborhood.” Each episode follows the young Daniel while he learns life lessons and navigates social cues, including how to cope with sadness and disappointment, and how to practice thankfulness and cooperation, according to a CPA press release.

Bowman said the live show is taken from a particular episode of the animated show in which Daniel Tiger takes time out to do good for his friends and neighbors.

“So it’s similar in that respect,” she said. “But it’s different from the animated show because it’s interactive with the audience, with singing and dancing.”

Bowman said that preschoolers today are too young to remember Mister Rogers, but they love Daniel Tiger.

Bowman, a graduate of Lindenwood University in Missouri and a Louisville, Ky., native, said she relocated to New York City last year for opportunities such as “Daniel Tiger’s Neighborhood.” She credits her 4-year-old nieces, who are fans of the television show, with stoking her excitement in the show.

“It’s an amazing experience for … my first national tour,” added Bowman, whose previous credits include stints in “Hairspray,” “Stop Kiss” and “A Christmas Carol.”

She said she grew up watching “Mister Roger’s Neighborhood,” thanks to her grandfather who recorded the program and let her watch it after she completed her homework in the afternoons.

“This is very nostalgic for me,” she said.

“It’s a children’s show, and you get to play games, you’re singing and dancing,” she said. “But the most important thing is the message.

“We really hope we’re bringing to life Mr. Rogers and who he was and what he stood for.

He set the bar pretty high. We’re trying to live up to it.”

The show is part of the CPA’s annual children’s programming for its 2016-17 season that also includes the hit Broadway musical, “A Year with Frog and Toad” on March 19, according to CPA officials.

Patrons to Sunday’s show may check out Kids Connections, which is free for ticket holders and includes a craft-centered, child-friendly activity in Eisenhower one hour before the show. Space is limited.

Visitors also are encouraged to take a contribution for a book drive aimed at supporting Mid-State Literacy Council’s efforts to improve reading and learning proficiency in children. Titles with reading levels of preschool to sixth grade are preferred and may be placed in blue collection buckets in the auditorium lobby.