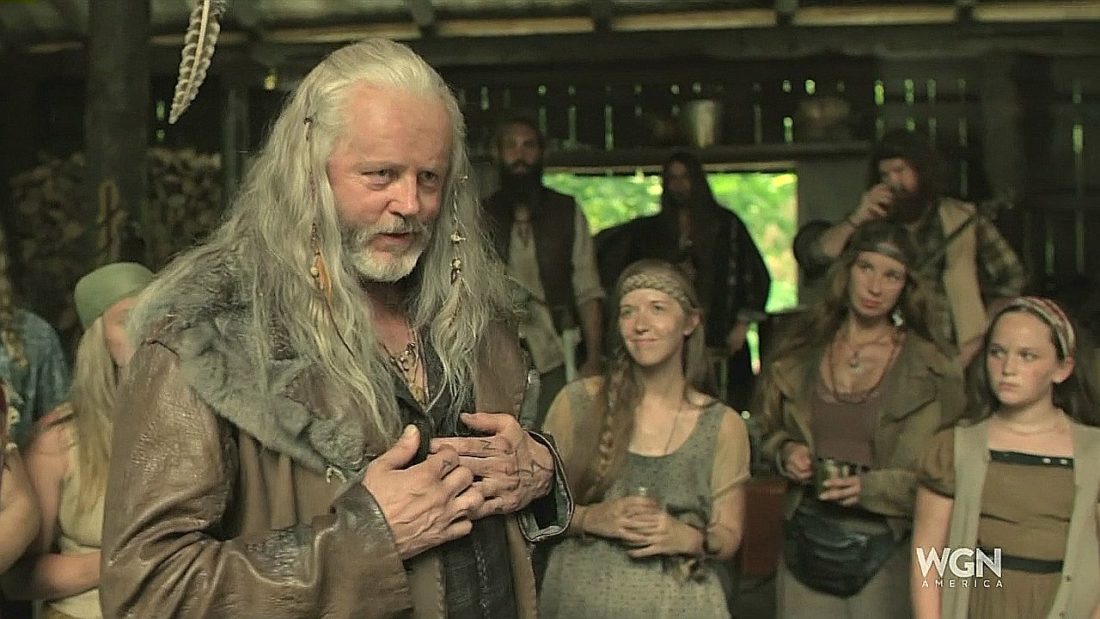 Courtesy photos Extra Mandie Gorsuch (center), a Roaring Spring native, is shown in a scene from “The Outsiders,” a WGN original series that will air later this month. At left is actor David Morse who plays the main character Big Foster Farrell in the show.

Whatever they’re called, they make the camera shot better and fuller, and they just might get on TV when the WGN America cable network premieres the second season of its original series called “Outsiders” later this month.

“We’re all background, just to fill in wherever they need us,” said Leila McCrumb, a Penn State Altoona student and one of several central Pennsylvanians who answered the casting call for the show that was filmed in and around Pittsburgh. “A lot of times when you work background, you’re placed where you might not be on camera. There’s no purpose except to fill space.”

“The camera sees everything, so sometimes if you’re loafing around in the background, you can ruin the entire shot,” said Russ O’Reilly of Hollidaysburg. “Sometimes you’re carrying on, doing your business, cleaning animal traps, whatever, just to add depth to this creative pursuit.”

Mimicking the first season, WGN America filmed the second season of “Outsiders” last year and it will premiere on Jan. 24, on the independent cable network and air on Tuesday nights (Channel 79 on Atlantic Broadband).

The story line, according to WGN: “A struggle for power and control set in the rugged and mysterious hills of modern-day Appalachia, ‘Outsiders’ tells the story of the Farrells — a family clan who’ve been in rural Kentucky since before anyone can remember. Living off the grid and above the law on their mountaintop homestead, they’ll protect their world and defend their way of life using any means necessary.”

Most of the outside mountain scenes were shot in Henry Kaufmann Family Park in Monroeville. Town scenes from the fictional Blackburg, Kentucky, were filmed in nearby Millvale, and interior scenes at 31st Street Studios in Pittsburgh’s Strip District.

“It’s incredible how down to earth and truly artistic the actors and actresses are,” said Erika Shrout, an extra who grew up in Titusville and now lives in Altoona as an independent sales representative and a traveling bartender for events. “Being on set is an amazing experience.”

Shrout said she took theater classes, was a member of the drama club and helped put on plays in high school, but did not pursue acting after graduating. She joined some talent groups on social media to land modeling jobs, which is how she found out about the “Outsiders” gig.

“I always loved acting and had been looking to get back into it,” she said. “When I saw this, I thought it was a perfect opportunity.”

O’Reilly said the call for extras for the second season caught his eye because it sought men with long hair and full beards and he fit the bill. Within a few weeks, he found himself on the Monroeville mountain and the “Outsiders” set.

The first day, he was sent to wardrobe, where he was dressed in camouflage pants and a regular shirt.

“They slathered me with dirt from head to toe and put stuff in my hair and messed it up,” said O’Reilly, a Johnstown native who is a staff writer for the Altoona Mirror.

In another scene filmed another day, he wore a ketchup-like substance on his face and wielded a knife in a battle scene right behind stunt actors.

Some shots “are like mayhem,” said the 29-year-old. “You’re running around screaming.”

O’Reilly said the job as an extra could be exhausting. He made the two-hour drive several days a month from May to October, and sometimes worked past midnight.

McCrumb happened to overhear a conversation about a call for extras in the spring of 2015 for “Outsiders” first season, and she signed up right away.

Originally from Palmyra, McCrumb plans to receive her bachelor’s degree in theater from Penn State Altoona in May and has wanted to be an actress since, as a child, she would stare at the family’s television screen and say, “I want to be like people on TV.”

She credits all of her professors, including her mentor Robin Reese, with understanding why she had to miss some classes to go to shoots.

“They know this is me, this is what I want to do,” said McCrumb, who plans to audition in New York City next month before top acting conservatories from around the world in hopes of getting accepted into theater graduate school somewhere.

If she doesn’t appear on another “Outsiders” set again, McCrumb said she made many lifelong friendships with fellow extras, including Mandie Gorsuch, a Roaring Spring native who now lives in Pittsburgh.

“Leila and I knew of each other before, but now we’re best friends,” said Gorsuch. “Even if season three doesn’t happen, we’ve got this friendship out of it.”

Gorsuch, 26, said she has been “background acting” since 2013, including “Concussion” with Will Smith and Morse, which also was filmed in Pittsburgh.

But it’s more an avocation than a vocation for her.

Gorsuch studied multimedia and web design at Greater Altoona Career and Technology Center, then got her bachelor’s from California University of Pennsylvania and today is a full-time graphic designer.

“I don’t have much of an acting background; I did a few plays when I was younger,” she said. “It’s just my hobby. I love doing it.”

And she said she loves watching how television production is done.

“My favorite part is watching the production, how they do stuff, how they cheat shots,” she said. “You don’t see that behind-the-scenes stuff when you’re watching the show, so to be involved in it is awesome.”

Said Shrout: “It’s amazing to see how much hard work goes into a two-minute scene. When you are sitting at home on your couch indulged in a scene with only two individuals interacting, you would never guess that on the other side of the cameras, there are 50 individuals holding their breath and truly making the whole thing come to life.”