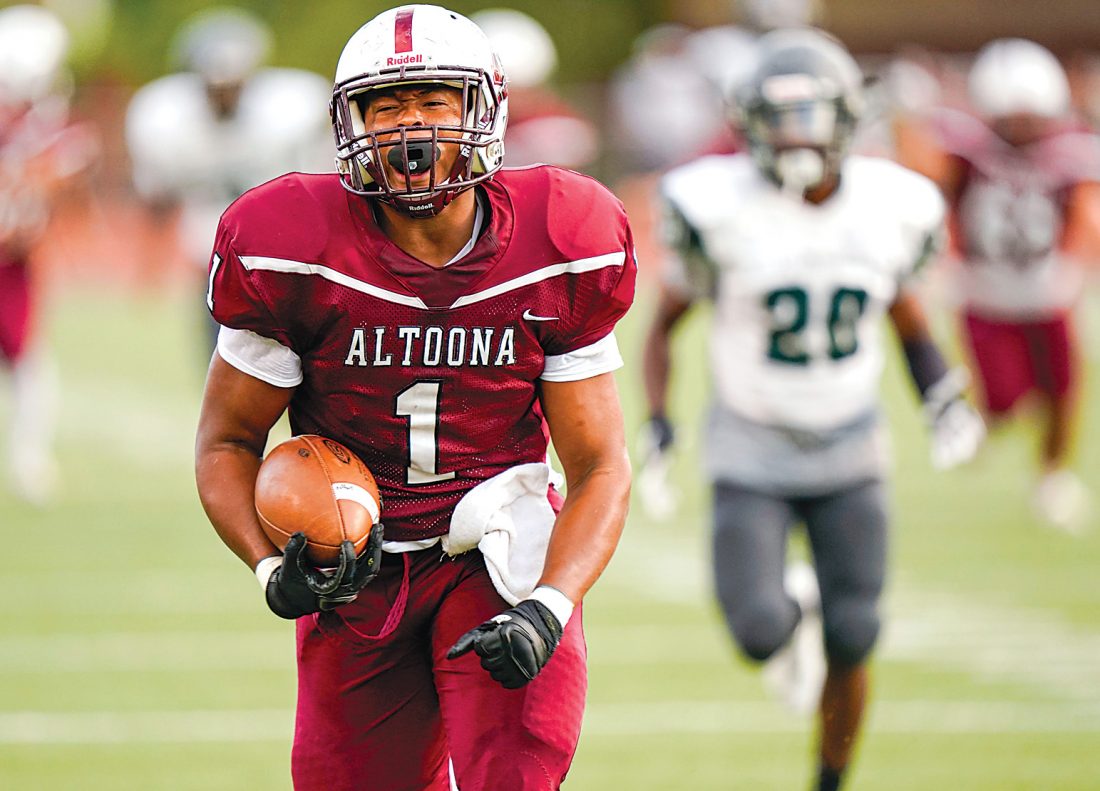 Photo for the Mirror by Chuck Meyers Altoona’s Rossi Pinkston gets loose for a 40-yard touchdown reception against Allderdice on Friday night.

Altoona jumped out to a 23-0 lead in the first quarter, scoring a safety and turning a blocked punt into a TD by Trevor Manley. Quarterback Marcus Day connected with Rossi Pinkston for a 40-yard score and Day finished off the big opening quarter with a 5-yard TD scamper.

Sparked by QB Shakur Pack-Adams, Allderdice stormed back with 17 points in the second quarter and eventually tied the game at 23 on Pack-Adams’ 5-yard TD run.

Altoona’s offense put together a nine-play, 62-yard drive to take the lead in the third. Day and fullback Ethan Stroup battered the line for 40 yards to the Dragons’ 16 before the Lions crossed up the visitors’ defense with a 16-yard touchdown pass from backup QB Aidan Steinbugl to Nick Petucci.

Pack-Adams’ 66-yard scoring strike to Saveionne Randolph quickly made it a one-point game, but the Dragons missed the extra point, much to the Lions’ relief.

Andrew Eisel’s 35-yard field goal gave Altoona a 33-29 advantage midway through the fourth and the Lions’ defense stopped Allderdice at the 11 in the final minute to preserve the win.

Play of the game: With the score tied at 23-all, Steinbugl tossed a 16-yard touchdown pass to Petucci to put the Lions on top for keeps, 30-23, late in the third quarter.

Player of the game: Allderdice QB Shakur Pack-Adams threw for two touchdowns, ran for another and accounted for 165 yards in a losing effort.

Most vital statistic: Altoona’s defense scored a safety and turned a blocked punt into a touchdown.

Altoona coach Vince Nedimyer: “We had a couple breakdowns here and there, but when we needed it, we got it. We got it offensively with a big drive and our defense stopped them late, with their backs against the wall.”

Allderdice coach Jerry Haslett: “To be honest, we gave them 23 points right off the bat. We came back and made a game of it and I’m proud of my kids for that. They stuck together and kept on pushing and it actually was a pretty good game.

“I’m disappointed with the loss, but I’m proud of my guys, I really am.”

CONFLUENCE — Northern Bedford could not keep up with Turkeyfoot Valley in the second half, which rode the ...

COMMODORE — Coach Amy Hileman likes to reopen the figurative scrapbook of her youth and remind the young ...

Lady ’Cats use ‘D’ to get to next round

MIFFLINTOWN — With a spot in the District 6 Class 4A tournament and a state berth on the line, the Huntingdon ...