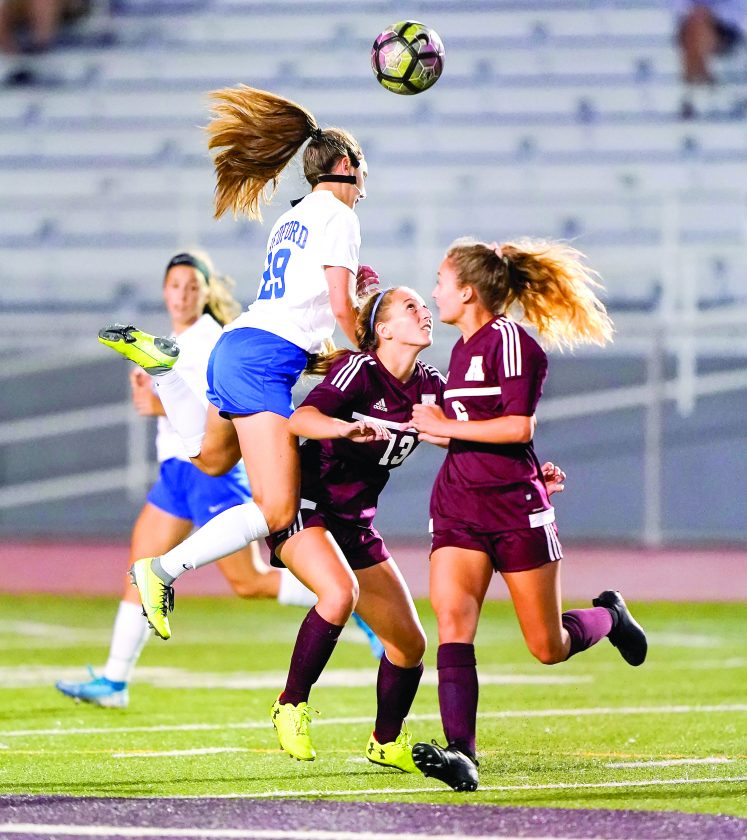 Photo for the Mirror by Chuck Meyers Bedford’s Taylor Downs (29) goes for a header over Altoona’s Morgan Sarver Saturday night at Mansion Park.

With time running out in the finale of the Altoona Lady Lion Shootout Saturday at Mansion Park, Altoona’s Morgan Sarver fed Lauren Kiser for a potential close-range shot on Bedford keeper Lindsay Mowry and an excellent chance to break a scoreless deadlock.

The play was whistled offsides, however, and the game ended in a 0-0 tie.

Altoona dominated possession time against the defending PIAA 2A state champions, but the Lady Lions couldn’t get one past Mowry.

Altoona was just off the mark with some shots, and the ones on goal, Mowry was there to stop. The Lady Bisons netminder stopped 11 shots in all.

“In games like this it’s the little things like instead of playing to space, play to feet and maybe we get one in off a touch or that last run where we got called offsides holding the ball for another half a second. It’s minuscule things like that, but I’m super proud of the girls,” Altoona coach Derek Winterburn said.

Altoona had six corner kicks to just one for Bedford.

The Lady Lions’ best chance from the corner came with 10 minutes left in the first half when Katie Aveni’s kick glanced off Mowry’s hand and toward the goal but deflected off of a couple players positioned at the near post.

Aveni had another chance 10 minutes into the second half, but Mowry made a sprawling save of a low shot headed to the corner.

About a minute later, Kiser looped a high shot in on goal that was headed for the net, but Mowry leaped and punched it away to keep the game scoreless.

Bedford’s best opportunity came with a little under nine minutes left in the game when Robyn Casalena threaded a pass between a pair of defenders that was just out of Lizzy Martz’s reach and rolled harmlessly into the waiting arms of Altoona keeper Julia Lane.

Coming off a program-high 13 wins a year ago, the Lady Lions were up for the challenge of playing a defending state champion that returned eight starters for this season.

“It’s hard to get excited for every game, but this was one they were definitely excited for. They were talking about it this morning and when they were coming in,” Winterburn said. “We have Hollidaysburg Monday, then go to Norwin and play Butler Saturday. They’re all quality teams. We needed a game like this to test us and see where we’re at. We played really, really well and handled the pressure well. It’s tough having the defending state champs come in to your house, but we did well with it.”

Bedford was equally excited for the early season non-conference test.

“We know what things we have to work on now. That’s why we wanted to get in this tournament. They possess the ball a lot like we do. They take care of the ball. They’re a quick team so we got to work on our transitions,” Bedford coach Jeff Thomas said. “We have to quit giving up so many corner kicks, and play to the feet better. A lot of our balls were to space and went out of bounds.”

There was no overtime, but coaches opted to take penalty kicks for practice.

Off to a good start

Altoona began the Lady Lion Shootout with a 6-1 win over Tyrone at Mansion Park on Saturday morning.

Darrian Berkheimer had two goals and two assists, Lauren Kiser scored two goals, and Morgan Sarver and Maura Kiser each had one.

First half: No scoring.