HoopsFest continues to be popular event 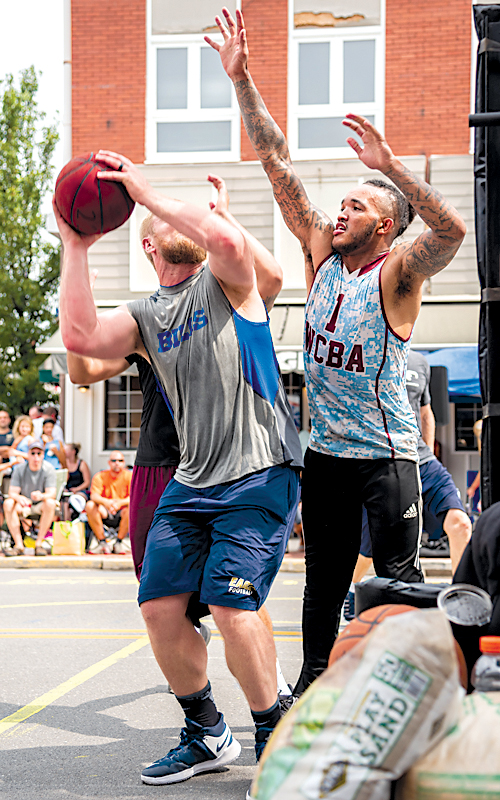 Photo for the Mirror by Isaac Ritchey Ray Hinton of Johnstown tries to block the shot of Colby Way of State College at HoopsFest on Saturday.

TYRONE — An event which started with 15 basketball teams in a Tyrone parking lot is now one of the most popular basketball tournaments in the NorthEastern United States.

HoopsFest was created in 2001 after Jim and Jessica Kilmartin and a group of friends thought of using a 3-on-3 basketball tournament to help impact the community of Tyrone. The event fundraises a goal of $30,000 each year.

Jim Kilmartin said the money is used to expand and fund outreach efforts at Joshua House, a ministry geared toward at-risk youth.

“This event has put Tyrone on the map,” Kilmartin said. “The goal is always to create an amazing atmosphere for the people that come.”

This year, more than 215 teams, representing a record 10 states, attended the event. More than 2,000 people watched as the teams competed on 36 street courts.

Kilmartin likened the event to a family reunion and said anyone can participate. A court at the corner of Logan Avenue and 10th Street held separate games for both 7-year-old girls and men in their 70s and 80s.

“This event is such a draw,” Latchford said. “Our community enjoys having this many people. It’s a benefit to the local economy and allows us to build friendships with people outside our community.”

In 2001, Tyrone resident Dave Rizzo was drawn to the hometown event and has attended each year since.

“HoopsFest ranks No. 1 of all the places I have played. It’s better than Italy, the NBA, than everything,” Smith said. “They shut down the streets and almost the entire city just for us to have fun and play basketball.”