A man for all seasons

Brandt more than a football player at Altoona 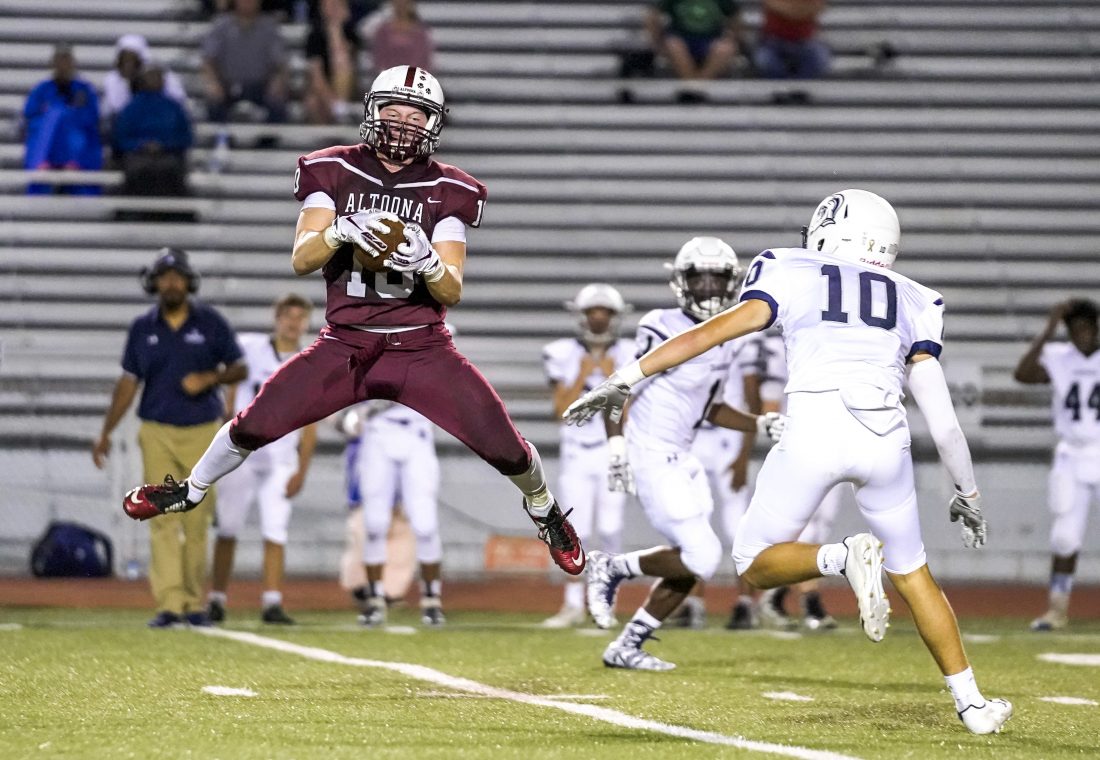 Whether it’s in sports, academics or volunteer endeavors, it’s quite apparent that recent Altoona Area High School graduate Jonah Brandt prefers to be active and engaged.

Brandt, who will suit up for the South team in the 35th annual Central Pennsylvania Football Coaches Association’s Lezzer Lumber Classic Friday night at Clearfield Area High School’s Bison Sports Complex, was a four-year member of Altoona’s varsity boys tennis team, and a two-year starter at wideout and linebacker on the Mountain Lions’ football team.

After playing junior varsity basketball through his junior year, Brandt participated in varsity wrestling as a senior last winter, competing at 170 pounds.

He did all this while maintaining a 96 grade average in the classroom and volunteering in various capacities as an instructor for the Blair County Special Olympics tennis program and the ARC of Blair County, an organization which serves members of the community with disabilities.

Playing all those different sports –including filling the number one singles spot on Altoona’s boys tennis team for the past three years — demanded an outstanding degree of personal discipline and time management, but Brandt appreciated the experience.

“It was tough, but it was definitely worth it,” the 5-foot-8, 175-pound Brandt said. “I think trying to balance them all during the summer months, when every single sport was having some sort of activity, was the hardest part.

“But I enjoyed it, I got to meet a lot of good people and teammates, and it kept me busy,” Brandt said.

Despite his success in tennis — a sport in which he teamed with fellow Altoona graduated senior Casey Rispoli to win a District 6 Class 3A doubles championship this past spring — Brandt liked football most.

“Football was my favorite,” said Brandt, who will attend college at California University of Pennsylvania and major in business administration, but currently doesn’t plan to play any sports there. “I think that the brotherhood and pride in the Altoona football tradition is what I liked the most about it.”

Brandt was a contributor on both sides of the line of scrimmage at wideout and linebacker for Altoona’s football team, and may see action at both of those positions in the Lezzer Lumber Classic.

“He’s like your utility guy, he’s a jack of all trades,” said former Altoona football coach Nick Felus, who coached Brandt for the past two seasons. “He’s a guy who you can put anywhere on the field and he will know exactly what he’s supposed to do because he has a very good football IQ, he’s an ultimate team player, and a hard worker.”

And versatile to boot.

“He’s a very well-rounded athlete, he stays active the year around, and that helps him transition from sport to sport,” Felus said. “He’s active in the community as well. He’s the type of kid who is going to get involved.”

“I think that Jonah is a very good competitor from playing all those sports,” Hovan said. “The fact that he’s been able to take his skills and translate them in three different sports that require different movement and strengths just speaks to his athleticism. His overall athleticism has enabled him to be successful at all of them.”

Both Hovan and Felus also said that Brandt was a strong leader on their teams.

“He was a really good teammate,” Hovan said. “He was definitely one of the leaders on our team. He always helped out the younger kids and encouraged them, and he was very good at trying to pass along knowledge to the other kids, whether it was about technical things, or about just trying to play hard.

“He’s just a great overall kid, and I know that he’s going to be successful in whatever he does going forward,” Hovan said.

Brandt is honored to be selected to play in the Lezzzer Lumber Classic, a game which he grew up watching.

“I’m honored to be selected, and it’s a really cool experience to play one last time,” Brandt said. “I’ve known about this game and watched it for years, and it’s really cool to be a part of it now. I’m excited to do it.”

Series history: Friday marks the 35th year for the Lezzer Lumber Classic football game, which started back in 1985 as the Uni-Mart Classic. The all-time series is tied, 17-17, following the North team’s 22-21 victory over the South team last year at Mansion Park.