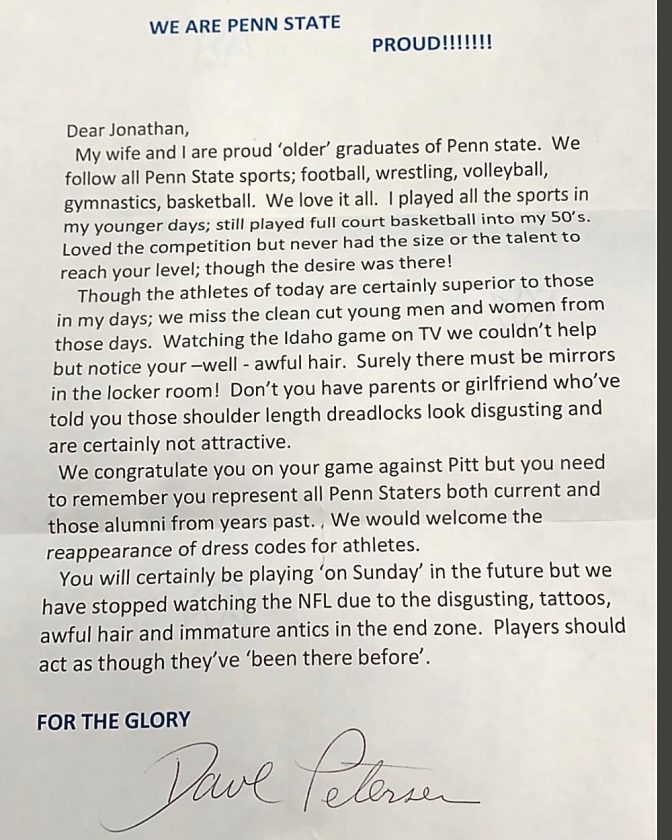 Penn State coach James Franklin and others have denounced a letter that many believe to have racist comments sent by a Johnstown man to a Penn State football player.

The letter, written and signed by Penn State alumnus Dave Petersen, was sent to sophomore safety Jonathan Sutherland. It was posted on social media Monday evening by senior defensive lineman Antonio Shelton, who wrote of the letter, “Explain to me how this isn’t racist.”

Petersen described he and his wife as “older graduates of Penn State.”

This section of his letter triggered outrage on social media:

“Though the athletes of today are certainly superior to those in my days, we miss the clean cut young men and women from those days. Watching the Idaho game on TV we couldn’t help but notice your — well — awful hair. Surely there must be mirrors in the locker room! Don’t you have parents or girlfriend who’ve told you those shoulder length dreadlocks look disgusting and are certainly not attractive.” 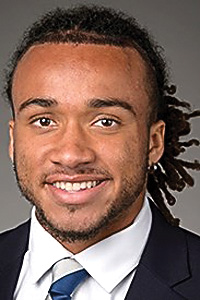 Franklin denounced the letter in the opening statement of his news conference Tuesday.

“The football that I know and love brings people together and embraces differences,” Franklin said. “Black, white, brown, Catholic, Jewish or Muslim, rich or poor, rural or urban, Republican or Democrat, long hair, short hair, no hair. They are all in that locker room together.

“Teams all over this country are the purest form of humanity that we have. We don’t judge. We embrace differences. We live, we learn, we grow, we support and we defend each other. We’re a family.”

Penn State University issued a statement denouncing the letter, noting, “We strongly condemn this message or any message of intolerance.”

Nittany Lion players and Athletic Director Sandy Barbour were among the vast number of people speaking out about the letter on social media, as well.

Sutherland released his own statement Tuesday.

“(On Monday) I received a letter by an alumni from the Pennsylvania State University who felt the need to share his degrading opinions in regards to my hair and what it stands for,” Sutherland wrote. “Although the message was indeed rude, ignorant, and judging, I’ve taken no personal offense to it because personally, I must respect you as a person before I respect your opinion.

“At the end of the day, without an apology needed, I forgive this individual because I’m nowhere close to being perfect and I expect God to forgive me for all the wrong I’ve done in my life.”

Petersen did not return a phone message from the Mirror seeking comment Tuesday. The 1966 Penn State graduate did speak to The Tribune-Democrat in Johnstown and said it “was not the intent at all” to make a racial statement in his letter.

“I would just like to see the coaches get the guys cleaned up and not looking like Florida State and Miami guys,” Petersen said.

He also told The Tribune-Democrat, “(The letter) wasn’t threatening or anything. I was just disgruntled about some of the hairdos that we’re seeing.

“You think of Penn State as a bunch of clean-cut guys. And you do see so many who are clean cut. But the tattoos and the hair — there are a lot of guys with hair coming down their backs and it just looks awful. And it’s the same for the NFL and NBA, too.”

“Jonathan Sutherland is one of the most respected players in our program,” the coach said. “He’s the ultimate example of what our program is all about. He’s a captain. He’s a Dean’s List honor student. He’s confident. He’s articulate. He’s intelligent. He’s thoughtful. He’s caring and he’s committed.

“He’s got two of the most supportive parents, and I would be so blessed if my daughters would marry someone with his character and integrity one day.”