The state Department of Conservation and Natural Resources this week awarded

$1.1 million to regional organizations for a variety of recreational and conservation projects.

The money from DCNR’s Community Conservation Partnerships Program is among $44 million awarded for a total of 266 projects throughout the state, according to a news release from the governor’s office.

The Antis improvements include creation of a basketball court and a volleyball court, repaving of several parking lots, landscaping work, creation of stormwater “best management practices,” expansion of bicycle and pedestrian paths, security lighting and new signage at the park, according to Township Manager Lucas Martsolf. The improvements will complement the township’s expected takeover of Bells Gap Trail, a share-the-road section that connects with the western end of the park, whose eastern end includes a mainline tracks crossover that may eventually connect with a proposed train extension to the Riggles Gap area.

“The park is the main nerve center,” Martsolf said.

The township will provide $100,000 of that match with Community Development Block Grant money and $50,000 of it with a grant from the Southern Alleghenies Planning and Development Commission, Martsolf said.

The township will provide the remaining $50,000 in match money with a mix of cash and in-kind contributions, according to Martsolf. The total cost of planned park improvements is actually $650,000, he said.

The proposed Greenwood Park improvements in Logan Township include a 9-foot-wide accessible walking path around the Altoona Curve Jr. baseball field and the Altoona Soccer Club field, a 5-foot wide, 4,700-foot-long mulch or gravel network of hiking trails in a wooded section of the park, a new bathroom on the south side of the soccer field, accessible paths leading to the existing bathroom, benches, trees and other accessibility improvements, said Logan Township Planning Director Cassandra Schmick. A mix of cash and in-kind contributions, including many donations from area businesses, will cover the 50-50 match, she said. At this point, Logan itself would be responsible for about $80,000 of that match, although additional sponsors could reduce the taxpayer obligation, Schmick said.

The Allegheny Ridge money will help provide staff support to the Conemaugh Valley Conservancy for a corridorwide communications plan and to support work on the 911 Trail, according to DCNR.

DCNR awarded the following amounts to other organizations in the region:

– $323,800 for the development of the Breezewood Proving Grounds motorcycle and ATV motocross park in Monroe Township.

– $50,000 for the Chesapeake Conservancy to build 10 acres of riparian forest buffer in nine counties, including Blair, Centre, Clearfield and Huntingdon counties.

– $50,000 for the ClearWater Conservancy of Central PA Inc. to build 12 acres of riparian forest buffer in three counties, including Huntingdon and Centre.

The $44 million allocated statewide comes from a variety of state and federal sources, including the Keystone Recreation, Park and Conservation Fund, which includes the Key-Community program and the Key-Land Trust program; the Environmental Stewardship Fund; the federal Land and Water Conservation Fund; the Pennsylvania Trails Fund, the Pennsylvania Heritage Area Program and the Snowmobile/ATV fund, according to DCNR.

The Growing Greener Coalition, while applauding the awards, complained that they are insufficient for the state’s conservation and recreation needs, as shown by their providing only about half as much as the $87 million that was requested for 442 projects.

“The fact that the state must deny nearly 40 percent of grant requests received reveals how underfunded these programs are,” the coalition stated in a news release, adding that conservation and recreation funding is at an all-time low. “The needs facing our commonwealth are great, and they grow exponentially with each year we ignore them.”

A second Blair County case of the coronavirus has been confirmed

Rachel Allison of Altoona posted on Facebook early Friday evening that she has contracted the virus. The Mirror is ... 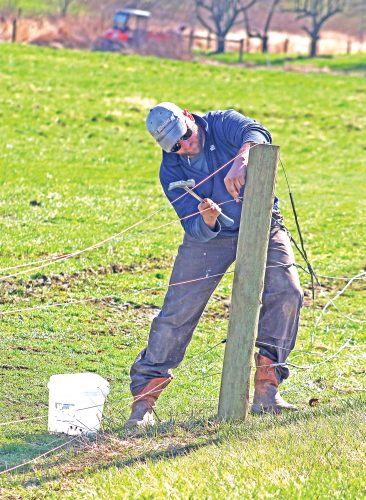 While uncertainty abounds as the world, the nation and our community deals with the fallout from the COVID-19 ...

The coronavirus has arrived. Blair County has a confirmed COVID-19 case, reported Thursday by the state ...

It is no longer business as usual as the corona­virus has forced everyone to adjust normal routines. Doors that ...

Reunited and it feels so good for Watt