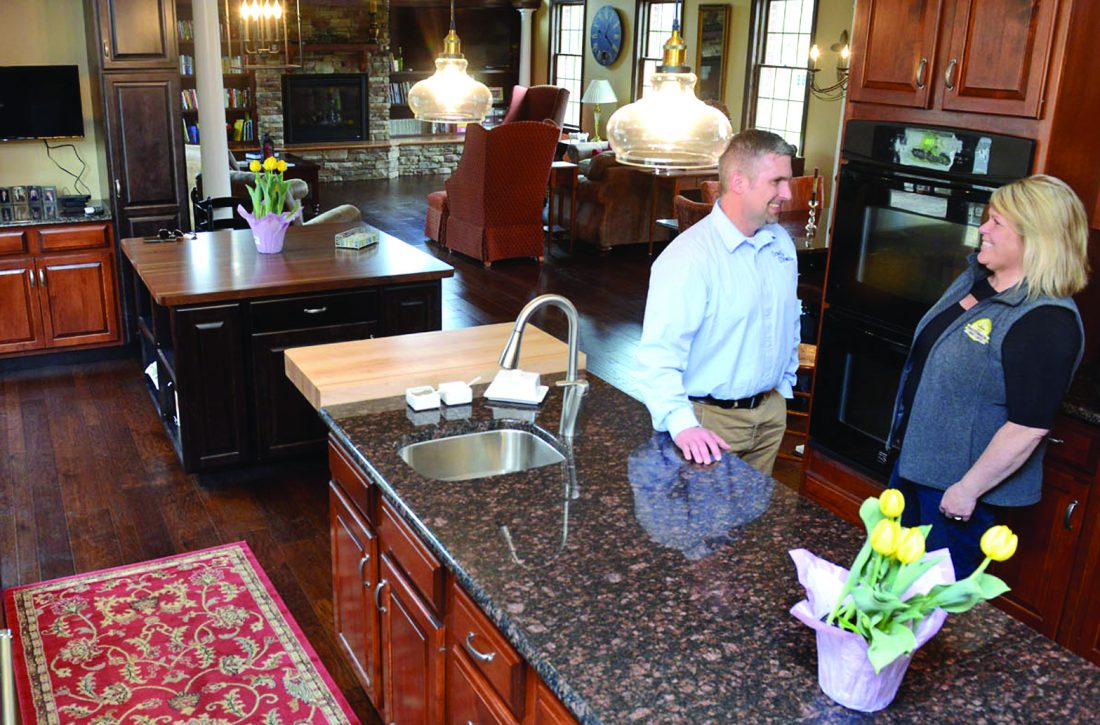 Mirror photo by Gary M. Baranec / Denny Cisney Jr. and his sister, Melissa Cisney Foster, talk in the kitchen of one of their latest completed projects in the Lower Brush Mountain area of Hollidaysburg.

HUNTINGDON — A risk Dennis Cisney Sr. took many years ago has paid off.

This year, the business started by Cisney and his partner, Richard O’Donnell — Cisney and O’Donnell, Inc. — is marking 50 years in business.

“It is a great honor for my dad, who started it with Richard O’Donnell. For him, it is gratifying, we are second generation owners,” Dennis Cisney Jr. said. “A lot of businesses don’t make it past the first generation, it feels like a major milestone for us.”

Cisney Sr. quit his job as a production worker at PPG in Tipton to start the business.

“Dad worked part-time at PPG and he realized this could be a full-time job. He quit his job and did this. Dad is a very entrepreneurial type guy, to do what he did. A lot of people wouldn’t take the risk — he has made it work,” Cisney Jr. said.

“They did roofing and siding jobs on the weekend. He realized there was a market to do this full-time,” Cisney Jr. said. “It was the two of them. They solicited friends and relatives to help, but did the jobs themselves. They got jobs by word of mouth. Today, we have 16 full time employees and a lot of trade partners.”

As the business grew, the partners purchased a used car lot and block building on Route 22, just east of Huntingdon. Over the years, the building has been remodeled and renovated several times.

“In the early days in the late 1960s and early 1970s it was mostly roofing, siding and windows — simple home projects. In the late 1970s, we started doing additions and new home construction. In the early 1980s, we brought on commercial construction building and renovation projects,” Cisney Jr. said. “In the early days, we had a half dozen jobs in a year, now we have between 80 and 100 jobs a year.”

The company has also worked with Penn State University.

In the early 2000s, Cisney and O’Donnell completed a multi-million dollar renovation of Penn State’s Palmer Museum of Art.

The company has been the general trades partner on several Kish Bank projects, including the one on North Atherton Street. They also completed an addition for the admissions building at Juniata College in the late 1990s.

In 1984, Cisney and O’Donnell started selling and building swimming pools.

“We had built our own pool and said this is something we can do for people,” Cisney Jr. said. “We open and close 80 pools a year.”

In recent years the company has backed off of commercial projects.

“We do light commercial (remodeling). Now our focus has been on residential remodeling in recent years. We still do roofing, siding and windows. Our bread and butter is kitchens, bathrooms and remodeling decks and porches,” Cisney Jr. said. “Remodeling makes up about 60 to 70 percent of the business.”

Cisney and O’Donnell concentrates its work over a five-county area — Huntingdon, Blair, Centre, Mifflin and Bedford.

Cisney Jr. said he hopes the company is known for doing quality work.

“We try to treat the property owners hard-earned money as if it were our own, that is the golden rule,” Cisney Jr. said. “We hope we are known for our quality work and integrity.”

“They are a core business in our county and in the wider region. They’ve been proactive in advancing their product and services mix, their offerings, and their methods over the years. They have a long history as a designer, which helps them stand behind their work.

“They work hard to make sure the customer gets what they want. Just as importantly, they see the bigger picture in developing the economy and are involved in community organizations and helping things progress. I look for them to become a larger presence as they continue to execute over time,” Reitman said.

Cisney and O’Donnell takes pride in its many repeat customers.

“Most of our work comes from past relationships with customers,” Cisney Jr. said. “The cool thing is we have customers who we did aluminum siding for in the 1970s. We’ve gone back to the same house and did vinyl siding. We have a lot of repeat customers, that is encouraging.”

Cisney and O’Donnell takes an interest in their customers.

Cisney Jr. said his father used to say “people don’t care how much you know (about construction), until they know how much you care (about them).”

“For us, it is about long- term relationships. We tell them we hope we are the only contractor they will ever need,” Cisney Jr. said.

Cisney and O’Donnell has been active in the community over the years, contributing to organizations such as United Way and Habitat for Humanity. In the early 1990s, the company donated $15,000 toward the development of a business park in Mount Union.

“We have tried to be community-oriented. My partners and I and everyone try to be involved with community organizations. That is important to us,” Cisney Jr. said.

Cisney Jr. attributes the company’s success to its employees and trade partners.

“It is our people. We have a carpenter who has been with us for 32 years. We have developed loyal and trusted trade partners who specialize in specific construction areas,” Cisney Jr. said. “These companies are required to meet our high standards in the areas of workmanship, customer relationships, construction waste recycling and warranties.”

Cisney Jr. said his father is semi-retired but works with the business in the summers.

“My dad lived with the business, it has been his passion. To (my dad and Richard O’Donnell) it was not a job — it was part of who they are,” Cisney Jr. said.

The company’s ownership has changed over the years. The current partners are Cisney Jr., his sister Melissa Cisney Foster and long-time employee Peter (Toby) Hood.

Cisney Jr. is optimistic about the future of the business.

“We will focus on what we are good at, slow controlled growth based on our core business, we don’t plan on doubling our size,” Cisney Jr. said.

ERIE — Waldameer Park and Water World will open for the 2020 season on Friday. Due to COVID-19 restrictions, ...

HARRISBURG — Pennsyl­vania small businesses can apply for grants to offset lost revenue caused by the COVID-19 ...