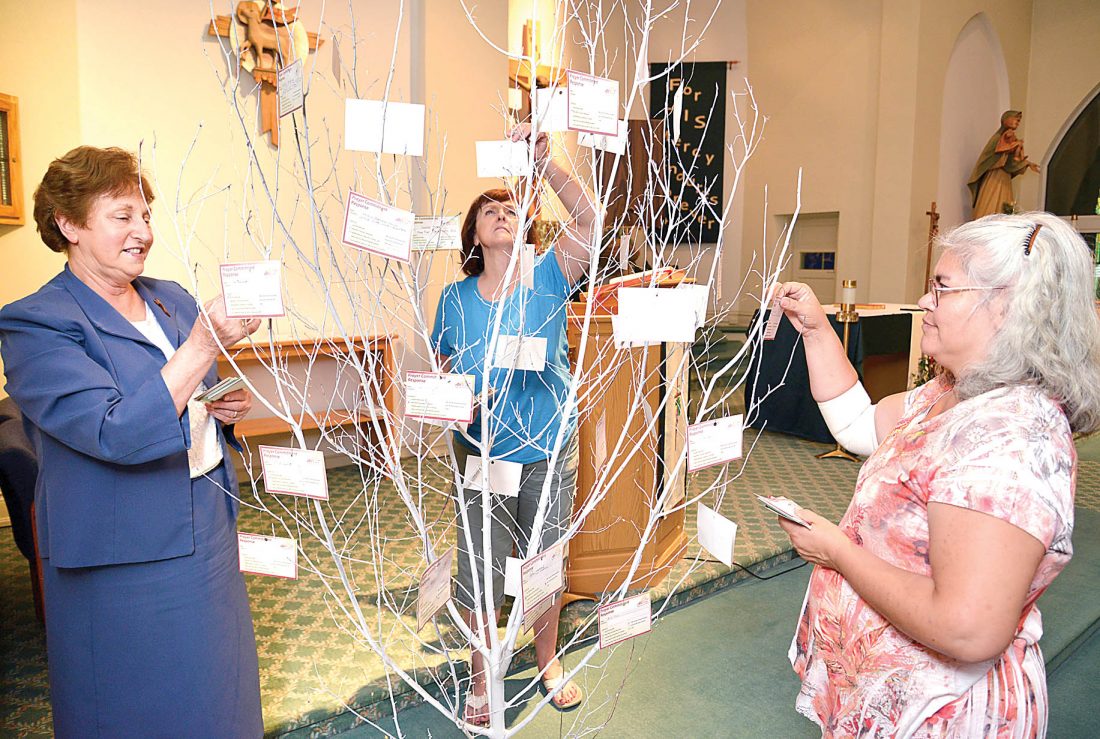 Arise Together in Christ, a renewal program being celebrated throughout the Catholic Diocese of Altoona-Johnstown, will begin its second year with a convocation.

The event will bring the program’s diocesan-wide team together, including parish coordinators and small group facilitators, as well as individuals.

“It is open to any Christian who wants to know more about the Catholic social teaching that Jesus identified in his life and handed on to us,” said Sister Linda LaMagna, Arise diocesan coordinator.

Leading the convocation will be Donald Asci, professor of theology at Franciscan University, Steubenville, Ohio. It will begin at 9 a.m. Sept. 21 at Bishop Carroll Catholic High School, 728 Benjamin Franklin Highway, Ebensburg. Doors open at 8:30 a.m. with the St. Joan of Arc Praise Band providing worship music. To register, visit www.dioceseaj.org and click on the Arise circle.

Asci’s topic is “Following Jesus and Transforming the World: The Social Dimension of Christian Discipleship.”

The convocation is in preparation for Season 3 of the Arise Together in Christ sessions that will begin at parishes throughout the eight-county diocese next month. It is about following in the footsteps of Jesus, Sister Linda said.

“It invites us to rediscover the Catholic social teachings of the church,” she said.

The seven principles of those teachings include life and dignity of the human person; call to community, family and participation; rights and responsibilities; option for the poor and vulnerable; the dignity of work and the rights of workers; solidarity; and care for God’s creation.

LaMagna said the principles are not anything new.

“Let’s rediscover them and become more active in Christian living,” she said.

Guidance for the three-year Arise program is provided by Renew International, a nonprofit organization based in Plainfield, New Jersey, that fosters spiritual renewal in the Catholic tradition.

Season 1, Encountering Christ Today, began last autumn and focused on Catholics growing in their personal relationship with the Lord. Season 2, Change Our Hearts, was held during Lent and zeroed in on how Catholic believers can change their lives to be in tune with the life of Jesus, his calling and his teaching, Sister Linda said.

Each season consists of a six-week program where participants met in faith-sharing groups of six to eight people. Scripture is read aloud, and the participants consider what it is saying to them and how to respond to it.

Among those taking part in a faith-sharing group is Bridget Shedlock, a parishioner at St. Joseph Catholic Church of Bellwood.

“It’s a wonderful program,” she said. “Sharing your faith with others helps to strengthen you as person as well as your faith community.”

Not only do the faith groups come together for discussions, but participants are presented with ways to put their beliefs in motion.

Ideas have included telling someone that God loves them unconditionally or saying a prayer for a person, she said. The following week, members of the group reflect on their experiences.

“It’s about living out your faith,” Shedlock said.

Season 2 was held during Lent, and she remembers praying for others, including those who would celebrate the Eucharist for the first time.

Sister Linda said another of the faith sharing groups at St. Joseph Church gave small gifts, such as candy, packets of seeds or tissues, to widows and widowers during the Lenten season. She said the gifts were a way to let the recipients know others were thinking about them and praying for them.

Still another of the parish’s eight groups visited a nursing facility and gave residents “thinking-of-you” cards.

Even those who are not in a faith-sharing group can get involved in the spiritual renewal through the parish’s Arise Prayer Tree. Each season, the tree is trimmed with commitment cards. Those who desire to participate take a card and commit to saying the rosary, doing a holy hour, holding a private prayer time or meditating at the stations of the cross, Sister Linda said.

She added that other parishes may be doing different things to get people involved.

Season 3, In the Footsteps of Jesus, will begin in October. Signups for faith-sharing groups will be held Sept. 21 and 22 and Sept. 28 and 29 at participating parishes.

Groups will begin to meet during the week of Oct. 6 or Oct. 13, depending on the wishes of the pastors, Sister Linda said.

Participation has been widespread during the first two seasons with about 85 percent of the churches participating. Students in parochial schools and colleges as well as residents of senior facilities also take part. The number of participants increased from Season 1 to Season 2, Sister Linda said

“The experience invites people to live their lives out of the Holy Spirit’s power which is already present in them,” Sister Linda said.

Shedlock said the Arise Together in Christ sessions have been powerful and she has seen relationships grow stronger.

“It’s very uplifting. You see your faith grow,” she said.