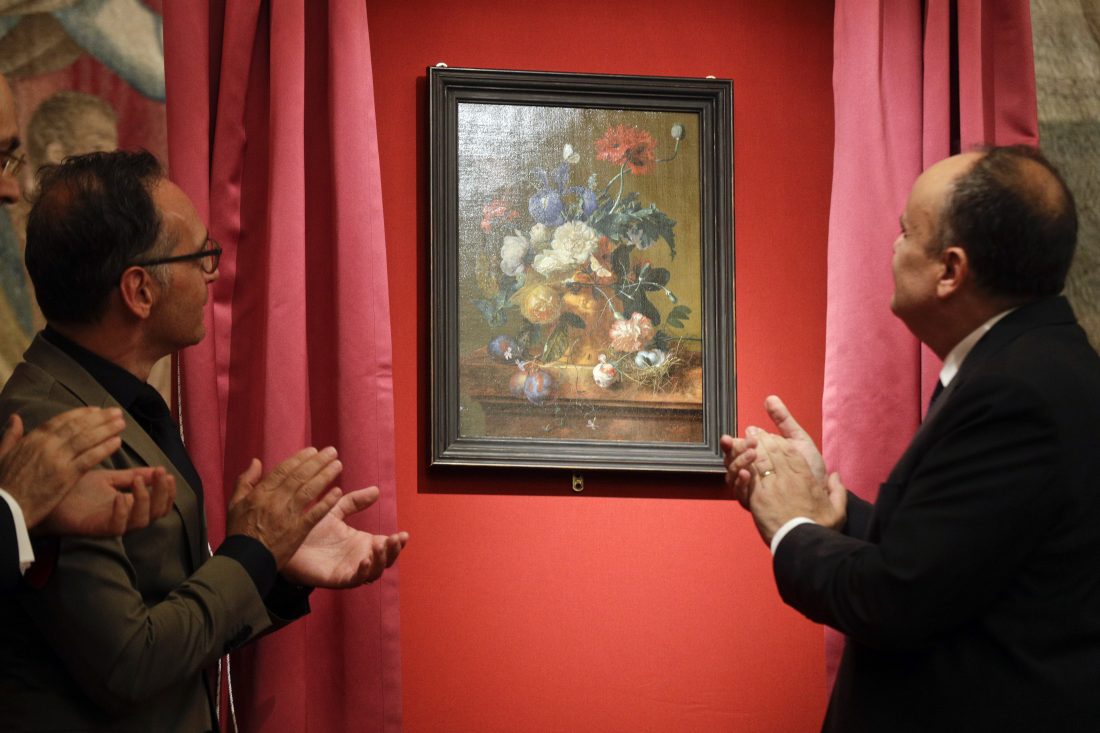 FLORENCE, Italy — A Dutch still-life painting, stolen by retreating Nazis and sent by a German soldier as a present to his wife, came back to a Florence museum on Friday, thanks largely to a relentless campaign by the Uffizi Galleries’ director, a German.

The foreign ministers of German and Italy were on hand Friday at Palazzo Pitti, a Renaissance palace that is part of the Uffizi Galleries, for the unveiling of “Flower Vase,” a masterpiece by Jan van Huysum, an early 18th-century artist whose exquisitely detailed still-life works were highly sought in his day.

Uffizi director Eike Schmidt earlier this year urged his native country to return the work. He had posted on a gallery wall three labels where the painting had hung before being taken during World War II: “stolen,” the labels read in Italian, English and Germany.

His homeland, Schmidt said at the time, had a “moral duty” to return the work.

Italian Foreign Minister Enzo Moavero hailed the “civic and moral courage of a German director of an Italian museum” in pursuing the painting’s return. As did his German counterpart, Moavero hailed the happy ending, saying it was achieved through “real Europeanism, of concrete facts” and not just words.

He revealed to reporters that the painting’s return was discussed, among other matters, during bilateral talks between Italy and Germany.

“Flower Vase” is so realistic it has been likened to a photograph. Van Huysum used a magnifying glass to study his subjects. Ripples are visible in insects’ transparent wings, to name just one striking detail on the returned painting.

The painting was acquired in 1824 by a grand duke of the Habsburg-Lorraine dynasty, which followed the Medicis in residing in the palace in Florence.

Shortly after the outbreak of World War II, the palace’s artworks were packed for safekeeping into wooden crates and moved from villa to villa. When the German army was retreating, the crates were added to other war booty and eventually ended up in Bolzano, an Alpine city near Austria. There the crate containing “Flower Vase” was opened, and in July 1944, a German soldier sent the painting to his wife in Germany.

Minister Moavero quoted the soldier as writing instructions to his wife to “put it in a gilded frame.”

The painting’s whereabouts appeared to be a mystery until a few weeks after the fall of the Berlin Wall in 1989. Starting in 1991, the German family repeatedly tried to sell the painting to Italy via intermediaries, “threatening to give it to a third party or even destroy it if a ransom wasn’t paid,” the Italian culture ministry said. The latest approach for money was made to the Uffizi in 2016, it said.

German Foreign Minister Heiko Mass thanked Schmidt for campaigning so passionately for the painting’s return. “Here is its place, here is where it belongs,” he said.

At a time of tensions among many European Union allies over migrant issues, Maas saw inspiration in the successful artwork diplomacy. He likened an EU “without diversity, without solidarity” to a “museum without paintings on display, a vase without flowers.”