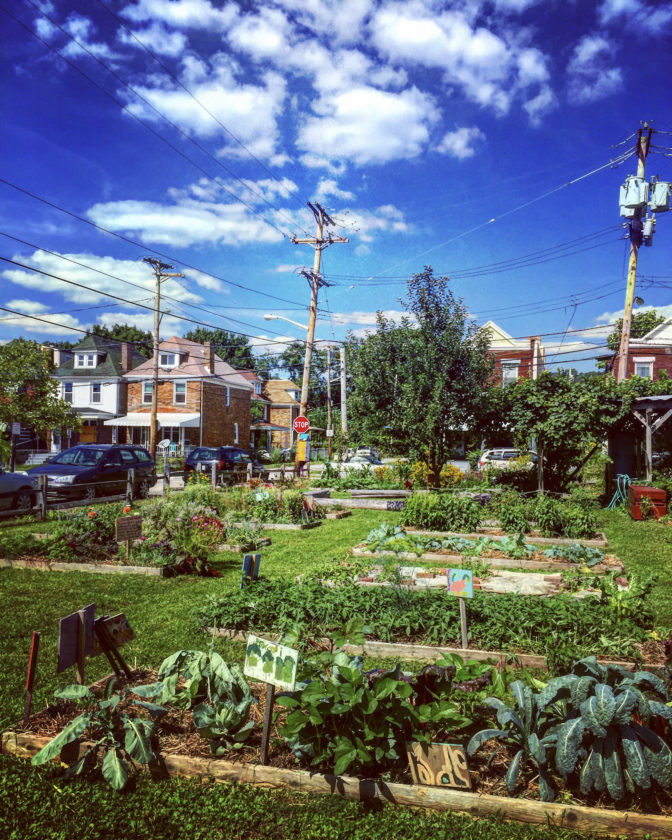 Courtesy photo This photo from Grow Pittsburgh shows an urban agriculture area in the city.

Living in the city doesn’t mean you can’t raise a wide variety of your own food. And a growing network of urban agricultural interests in Blair County is trying to make it easier.

“We’re surrounded by all these big farms, but people living in the city of Altoona are going hungry … because they live in a food desert,” said Beth Futrick, an ombudsman with the Blair County Conservation District and recipient of a $46,000 grant last year to start the urban ag program.

“Food deserts” are large pockets of residences at least a mile from a supermarket or large grocery store where fresh food can be purchased, she said.

“Too many poor people lack transportation to get to Weis so they walk to the closest convenience store” and purchase prepared, processed food, according to Futrick.

Last year, she enlisted the Healthy Blair County Coalition and organized the network’s first event, a tour of a community garden in State College. More than 30 people in the medical field, schools, WIC and other social programs showed up, Futrick said, with one common goal: How to get healthier foods to their customers, their clients, their patients, their students.

“We are trying to reach out to as many people as we can and build a network.”

The grant helps pay for her salary, as well as a consultant, speakers and other education programs, especially to get the word out about the programs, she said.

Tyrone Milling, for example, held a seminar on how to raise backyard chickens, and the network promoted the idea. It is legal to raise chickens in your backyard in Altoona, said Planning Director Lee Slusser, who noted that goats, chickens and rabbits are “great urban animals.”

The City of Altoona mulled an animal husbandry ordinance similar to Pittsburgh’s, but there haven’t been very many complaints so it got shelved for the time being, said Slusser, who is an active member of the urban ag network.

But it still would be unwise, Futrick said, for city residents to have a rooster.

“My dad had a rooster that at 3 o’clock in the morning would go ‘cockadoodle doo’,” she said. “Don’t make your neighbors upset.”

Futrick noted that Pennsylvania has a right-to-farm law that prevents municipalities from getting too strict, though.

“We can regulate how many animals you can own,” such as one cow per acre, Slusser said. “But we can’t ban it outright.”

Another major component of the urban ag network is the Society of St. Vincent DePaul, which has operated the nonprofit Monastery Community Gardens south of Hollidaysburg since 2008. In addition to growing produce for local food banks, the society rents out garden plots and a few are still available this season for $25 or $40. (Contact Kathy Saller at ksaller@netzero.com).

It also sponsors regular gardening classes in conjunction with the urban ag network.

The next education event, a workshop sponsored by the National Association of Conservation Districts, will discuss indoor farming techniques from 9 a.m. to 2:30 p.m. on June 12 at the Logan Valley Mall Community Room. The deadline to register is June 1. Area experts will discuss hydroponics (growing plants without soil); aquaponics (dealing with the relationship between aquaculture, or farming fish, and hydroponics); Bokashi composting (an anaerobic composting method for kitchen scraps, including dairy and meat); and growing microgreens, the immature shoots of edible plants. A $15 fee to attend includes lunch and education credits are available.

A bus trip to Pittsburgh on June 28 ($30 per person) will include visits to several programs of the Grow Pittsburgh program, which formally organized in 2008 and today has 18 full-time staff members.

“We really think about growing food across the city, among all different ages and in all different kinds of communities,” said Jake Seltman, executive director.

Its programs include urban gardens and school gardens, and it provides resources for community gardens throughout Pittsburgh, having started more than 60 of them before turning over their sustainable operations to the communities in which they’re located, he said.

“We provide a lot of resources,” Seltman continued. “We share best practices and make it easier for people to grow their own food.”

Its website (www .GrowPittsburgh.org) is full of resources for urban dwellers.

The Blair urban ag program specifically will visit the Grow Pittsburgh’s Braddock Urban Farm, as well as the Allegheny County Courthouse’s rooftop garden, the Phipps Conserva-tory and Botanical Gardens’ Center for Sustainable Landscapes and the Phipps’ Homegrown program at the Homewood YMCA.

Among the lessons Futrick said she hopes the network can teach to consumers is an understanding of growing seasons and which crops are available here and when.

“They want corn in April,” she said. “We just need to do some customer education. We shouldn’t buy so much from California. There it’s picked to travel, not for good taste.

“We can grow really nice stuff here in Pennsylvania.”